Around our house we’ve managed to avoid some of the more traditional addictions, but there’s one monkey yours truly simply will never get off his back: Amazon. I go through books like an elephant goes through peanuts. And when the UPS man rings the doorbell, the cats scurry under the bed and I wish that the floor would kindly open up and swallow me because you-know-who’s been on Amazon again.

Imagine then the fellow who answered the door recently and found one of those familiar brown Amazon boxes taking up most of the back of a flatbed truck. “Heh heh, honey, you know how I said I went a little crazy this Christmas…” 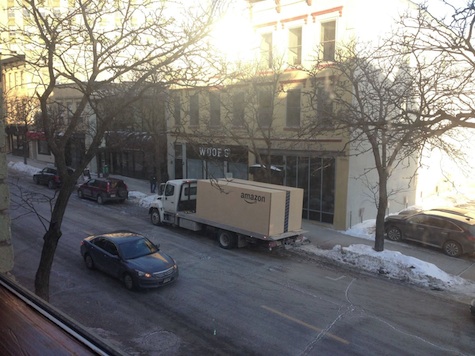 In actuality, the box contained a brand new blue Nissan Versa Note…and a $1,000 Amazon gift card. The gentleman in Madison, Wis. had actually closed the deal for the car at a dealership earlier – whether he knew it was going to be delivered with such fanfare isn’t clear. (The delivery was captured by a camera crew for publicity purposes.) It seems two other Nissan buyers will be getting a similar treatment. 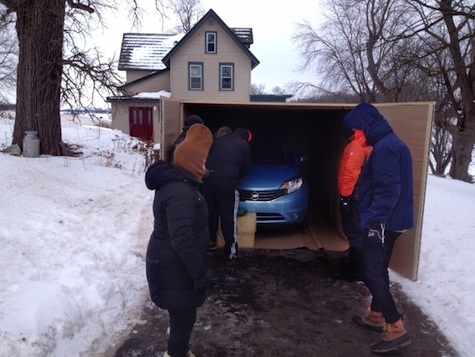 The whole thing caused quite a stir in Madison, and on sites such as Reddit, where a photograph of the giant Amazon box en route inspired a great deal of speculation about what might be inside.

And it got us to thinking – when was the last time you saw somebody go all out with a larger-than-life paper/cardboard promotion like this? In the good old days it seems we saw a lot of this, but not so much anymore. Pity, really. Seems like a real missed opportunity there.

Now if you’ll excuse me, I have to get to the door before the UPS man rings the bell – just one of the unseen prices of addiction, I’m afraid.