We love paper; we’ve spent years collecting it. And sooner or later we know our home is probably going to go up like a Roman candle because of the stuff. Never mind all the lovely design pieces that will perish, a fire could also destroy valuable legal documents, too. Similar concerns have spurred scientists to work on improving the durability of paper over the years. Now researchers in the Shanghai Institute of Ceramics at the Chinese Academy of Sciences appear to have made a dramatic discovery.

Using an inorganic compound called hydroxyapatite (HAp), they developed a paper that is fire resistant, and can withstand temperatures up to 842 degrees Fahrenheit while still remaining highly flexible.

More than that, it is strong enough to hang an object weighing nearly a pound from it without breaking. (It might help to know that HAp is the main component of teeth and bones, and is used to make bone replacement material.) The quality of the printing on the new super paper is comparable to that of printing on traditional sheets. 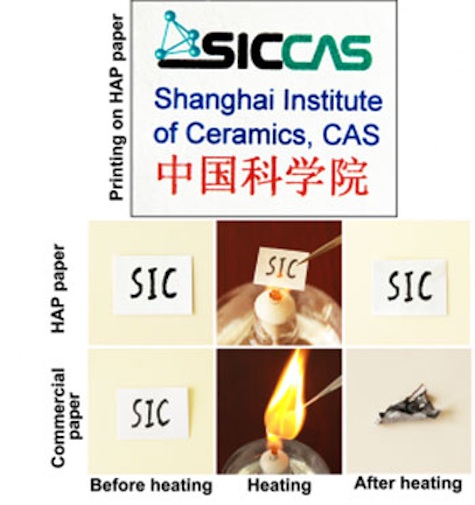 The whole business is accomplished with nanotechnology, magic words and pixie dust, the details of which you can learn about here.

Now if you’ll excuse us, it’s time that we were getting back to our little death trap.