That’s Where the Catalog Sleeps

Direct marketing has a long history of clever promotions, but some landmark of gleeful whimsy was reached by Australia’s 303Lowe agency when it came up with its 2012 campaign for IKEA.

In an attempt to reverse the short amount of time households Down Under hang on to IKEA catalogs, the agency launched its “The First Catalogue That Pays Rent” initiative, which was as good as its word.

In the first three weeks, more than 68,000 people signed up online to “rent space” to a copy of the 2012 IKEA catalog. In return, they received monthly “rent checks” made out to them that gave them some form of discount, such as $25 off the first $150 they spent at IKEA. The $1.3 million campaign was heavily promoted in magazines, on billboards, and on social media sites. 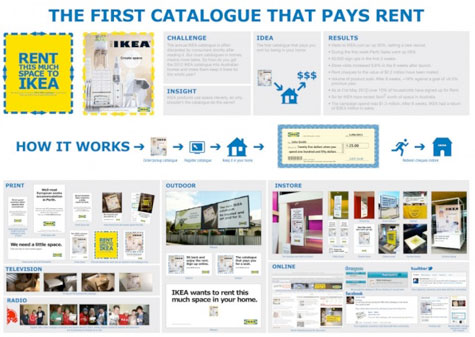 The results were hard to ignore. In all, IKEA sales in Australia jumped 79%; visits to its Australian website went up 30%, with 10% of all Australian households signing up for the program. At last count, $2.2 million in rent checks had been mailed. Small wonder that the campaign made 303Lowe a Gold Winner in this year’s Caples Awards from Direct Marketing News.