Sure, we’ve all heard about those machines that print 3D versions of just about anything you can think of out of plastics and other hard materials: everything from car parts to (sigh) working guns. Yet Mcor Technologies makes a printer that creates 3D items out of paper by cutting, coloring and layering it. The resulting creations are so realistic, sometimes you have to actually handle the object to discover that it is, in fact, paper.

Recently an Mcor sales manager was stopped by airport security because of a 3D paper hammer in their luggage:

“When I said it was made of paper he could not believe it, although he did comment that only the weight told him it was not real. He sent for his supervisor – same reaction.  They then started to show everyone around and began to talk about making customised tools, parts for cars, phones, was this printer that produced the hammer model really made in Ireland, and many other comments.

In the end the hammer still had to be handed in as I could not take it in my hand luggage because, ‘it looked too real; it could be used to threaten people.’ “ 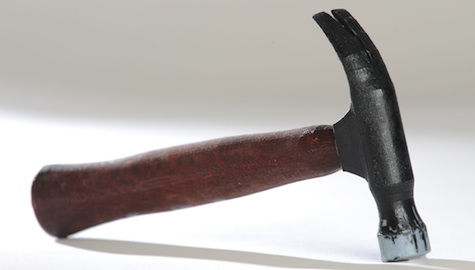