Comics You Can Dance To

The Japanese squeeze an awful lot out of their comics, or “manga”. There’s action manga for boys, romance manga for girls, business manga for business people – it’s a pretty versatile little medium. And now Japanese design group Mieru Record has figured out a way to put it all…to music.

The group’s invention, The Otowa, consists of a hand-cranked music box and a series of manga comic strips filled with strategically placed holes that  add a rousing score to the on-paper adventures as you read. We are indebted to Fast Company for the following description:

“On some manga strips, there are pauses for panels when dialogue is happening, only for the music to spark back up as talking gives way to action. In other strips, the manga itself instructs you to crank the music box faster or slower to adjust the tempo of the music to suit the action, so a scene where a character is running, for example, would be faster than a scene in which the character drinks a cup of tea.” 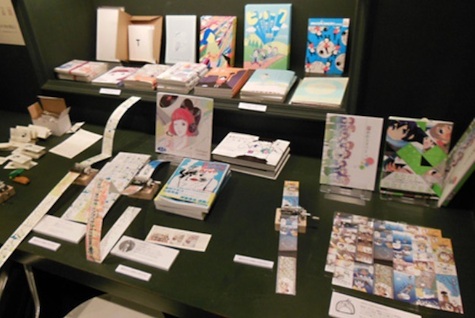 Of course this is not the first time a music box mechanism has been used to wring special tunes out of a paper medium. In June there was the story of the Austrian experimental duo Ritornell who included a bit of their music in their business cards, which were meant to be played through a music box.

Personally we think this is a technology that should be added to paper correspondence, featuring subtle music cues to give you some idea of what is contained in the missive in question:

The possibilities are endless..