Quite frankly we were prepared to give this one a miss, reasoning that our own love for HBO’s Game of Thrones shouldn’t enter into our choice of stories for PaperSpecs. But then we read Boing Boing’s reblogging of a WinkBooks post on this and realized we were in danger of missing out on one of the most ambitious commercial paper projects this year, all in the name of objectivity.

As you’ve no doubt worked out, Game of Thrones: A Pop-up Guide to Westeros is similar to those pop-up books we remember fondly from our youth. Yet this 5-page volume offers 33 pop-ups depicting the various castles, keeps and towers of the series, with a level of precision and complexity in papercraft that you don’t usually equate with such books.

Here’s the bit of the WinkBooks post that caught our eye:

…the book is fun enough as a beautiful pop-up. But then I noticed a mysterious sheet of paper – titled “Unfolding the Map” – taped to the back of the book with illos that looked like origami instructions. Huh? I figured there was a pull-out map inside the book that I missed. But as I followed the somewhat complicated steps (okay, I had to call Mark into the office to help me out, and it took us over five minutes to properly unfold the thing), I realized this wasn’t just your typical paper map we were dealing with – we were unfolding the actual book (almost as tricky to do as one of those intricate puzzle boxes from Japan) until it turned into a very large, interactive, three-dimensional atlas of the Seven Kingdoms. 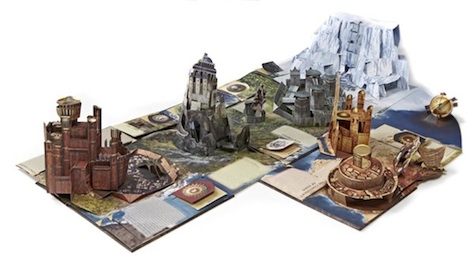 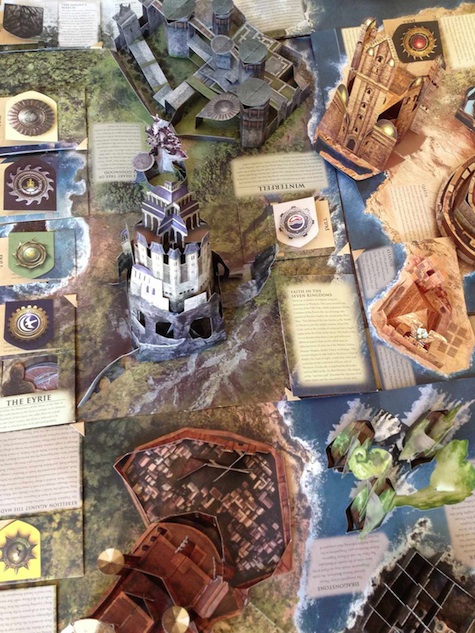