Bob Dylan’s 1965 hit “Subterranean Homesick Blues” is famous not only for inspiring the name of ’60s American activists-turned-terrorists Weatherman/Weather Underground, but also for being the subject of one of the first music videos. That video depicts Dylan standing in front of a camera as he cycles through the lyrics of the song on large cue cards as it plays.

Taking a creative break, Brazilian art director/graphic designer Leandro Senna recreated all the lyrics from the song in hand-drawn type using only pencils, black tint pens and brushes on paper. Of course this meant if he messed up even one portion of a card, he had to start over. 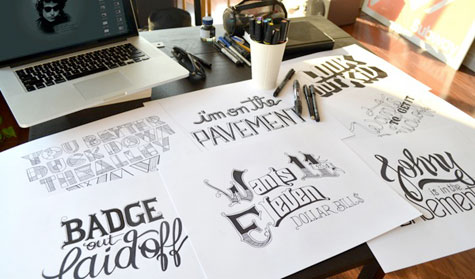 In total, Senna created 66 cards that not only improve artistically on the hastily drawn cue cards in Dylan’s video, but also include intentional misspellings and puns inspired by those the musician used in the original.