Apparently February is Off Our Meds Month. Shia LaBeouf’s wearing a paper bag on his head when not swiping other people’s work, and now Sports Illustrated‘s annual Swimsuit Issue (out Feb. 18th) has put Barbie on the cover. Really. Clad in an updated version of the black-and-white swimsuit the doll wore during her 1959 debut, Barbie will…no, sorry, we can’t do it.

Sure, sports photographer Walter Iooss Jr. did an admirable job with the   photo shoot. Unfortunately, both Barbie and the Swimsuit Issue are so highly charged politically – and completely outdated in the Internet age – enjoying the whimsy of it all takes some doing. This from Ad Age:

“Barbie is a legend in her own right, with more than 150 careers and a brand valued at $3 billion,” a Mattel spokeswoman said. “She is in great company with the other legends such as Heidi Klum and Christie Brinkley, to name a few.”

No, Barbie has had more than 150 career outfits because, you know, girls like playing dress up. The models mentioned made a career out of it.

It’s worth noting that this magazine cover was unveiled the same month that Getty Images and LeanIn.org rolled out a collection of less sexist stock images. Both stories are like two ships passing in the night: one sailing off into a bright, hopeful future; the other being pulled back into the Sargasso Sea of yesterday. 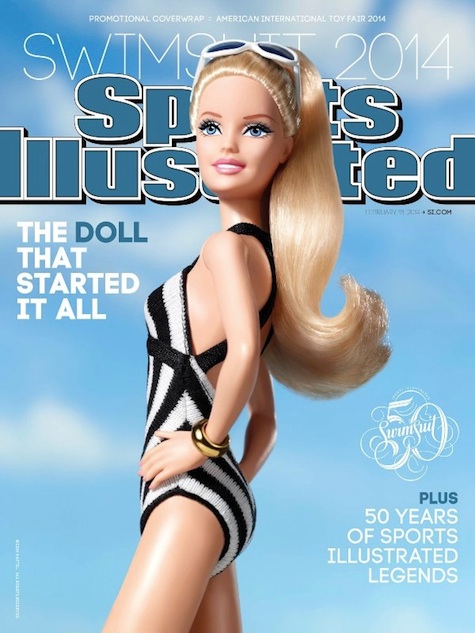