Posted On July 7, 2020, in Paper Inspiration
Share this article:
7 likes

Here’s my recipe for the perfect print cocktail. Start with one clear vision, add some eye-catching art, stir in an unexpected burst of interactivity, and garnish with just a pinch of out-and-out creative insanity. It’s a recipe that Rivington Bye and Boss Print seem to have followed to the letter when crafting this delightfully off-the-wall cocktail menu for London’s Scarfes Bar…with a little help from Tupac Shakur, the Red Hot Chili Peppers and friends, of course. 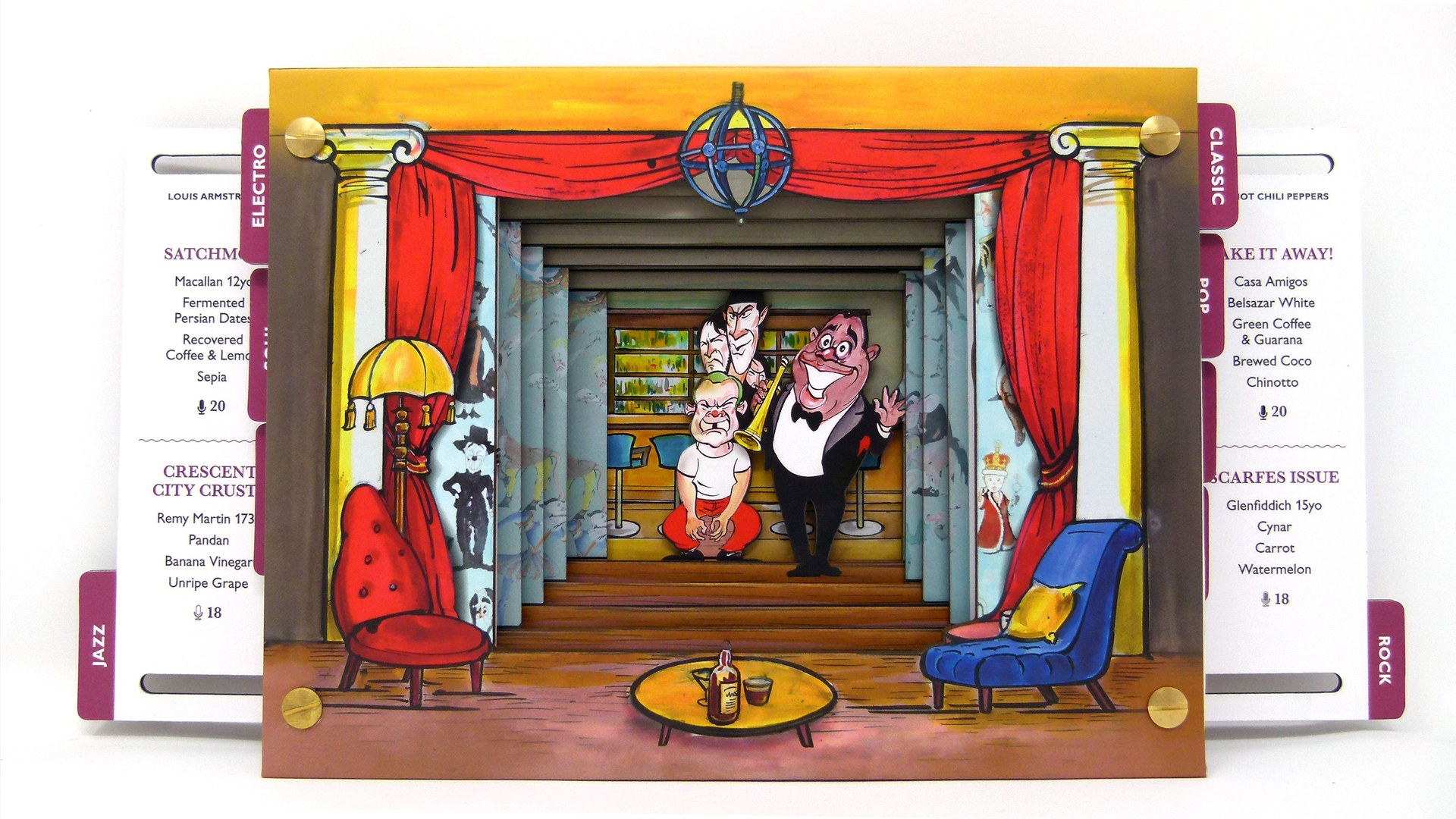 Located just a stone’s throw from London’s Covent Garden, this jazz-fueled watering hole is a living tribute to the artwork of founder Gerald Scarfe, whose cartoons and illustrations have adorned everything from The New Yorker to the album and film for the Pink Floyd classic “The Wall.” When it came time to design this cocktails menu, designers Rivington Bye dreamed up a unique way to bring the musical-celebrity caricatures Scarfe supplied to glorious life. Based on the look of a Victorian toy theatre, the menu is both more and less complicated than it looks.

The creative team began by constructing a cartoon version of the bar itself inside a thin wood-ply slipcase wrapped in 160 gm (110 lb.) Fedrigoni Splendorgel. (Hold onto your hats, folks, because this is where it starts to get brilliant.) 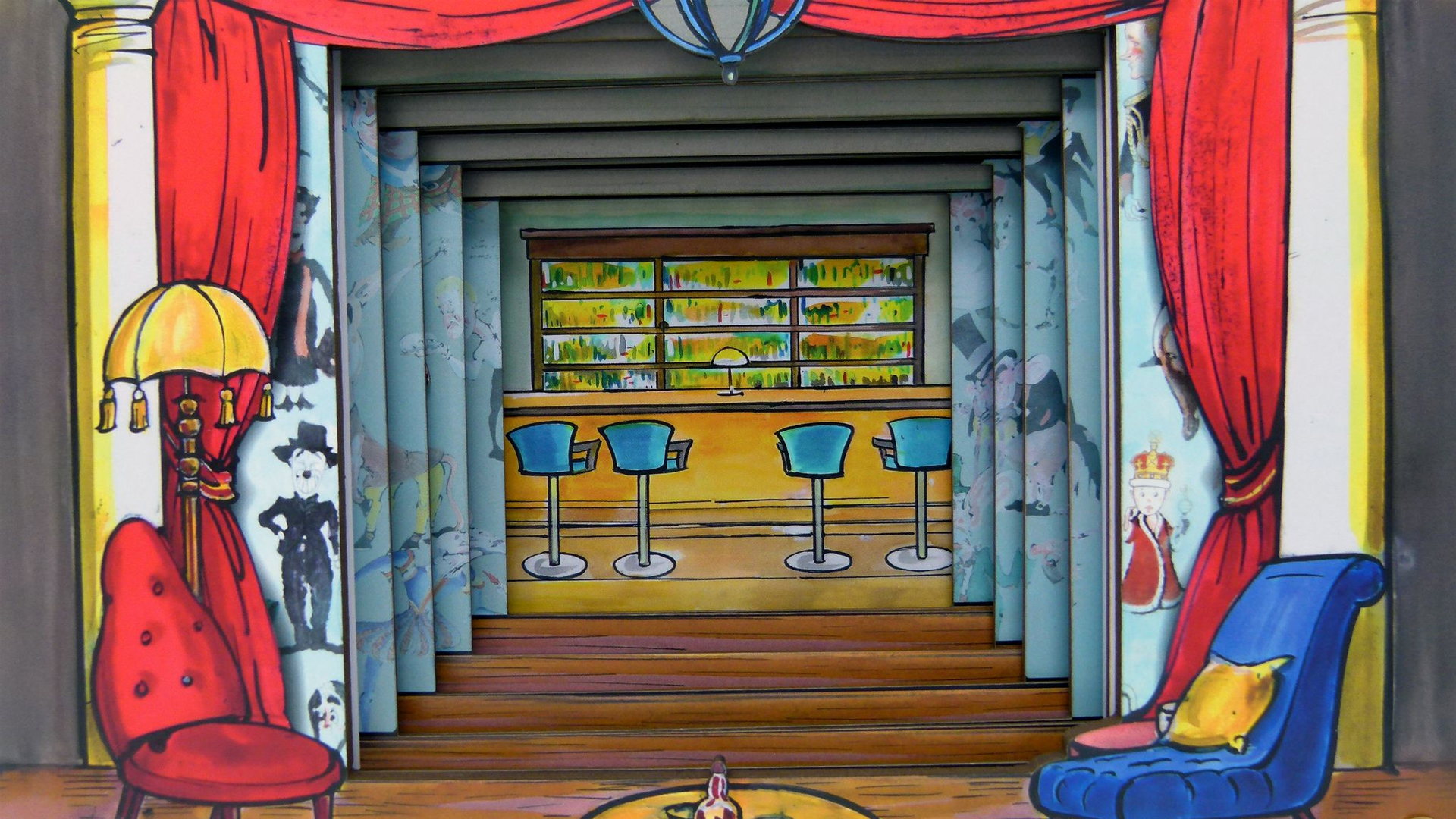 They then duplex laminated [PRO Guide: Duplex Lamination] 9 digitally printed cocktail cards – 270 gm (180 lb.) Splendorgel – onto Black core board and subjected them to stunningly precise laser cuts. These were then stacked and inserted into the slipcase. 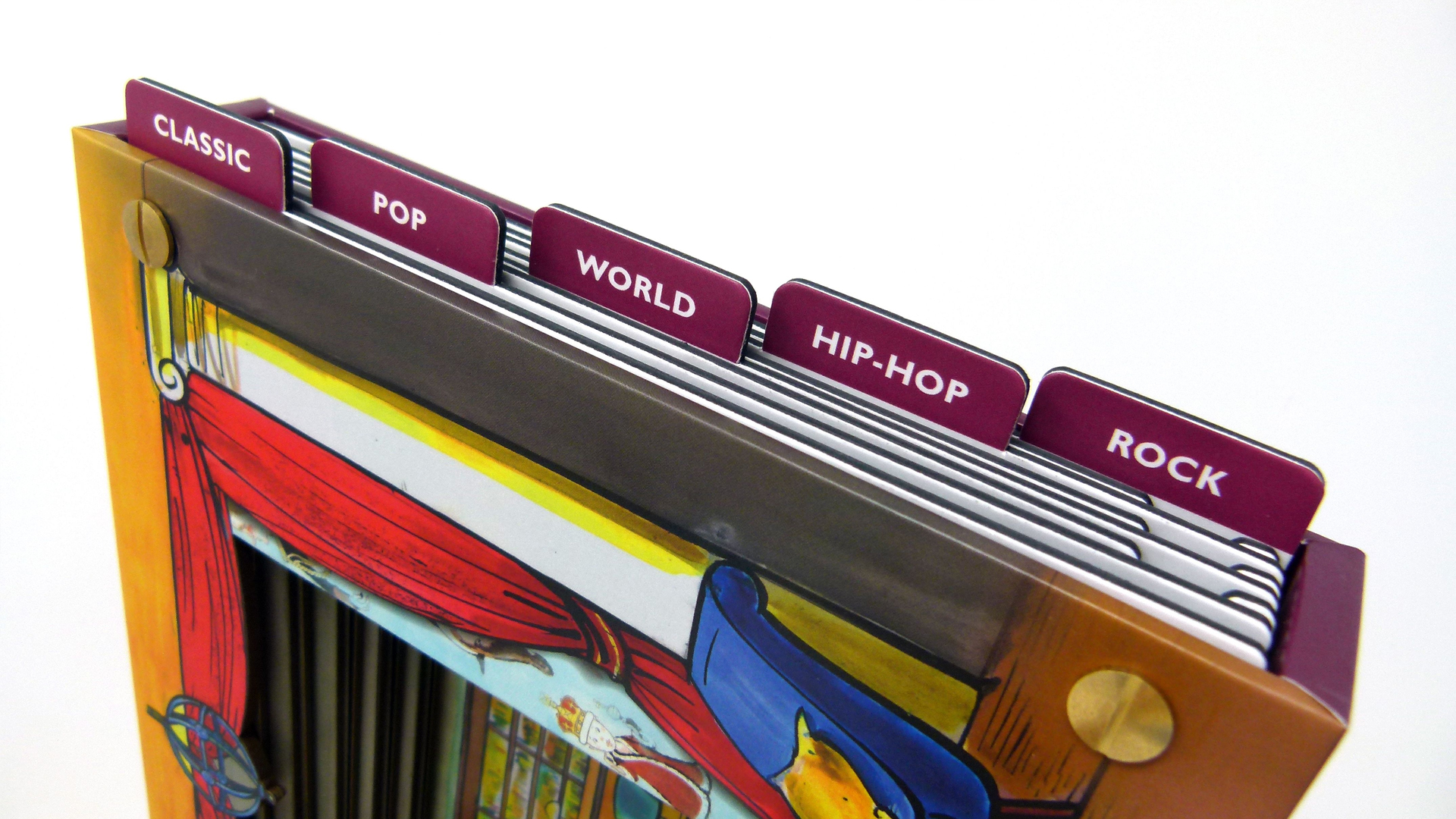 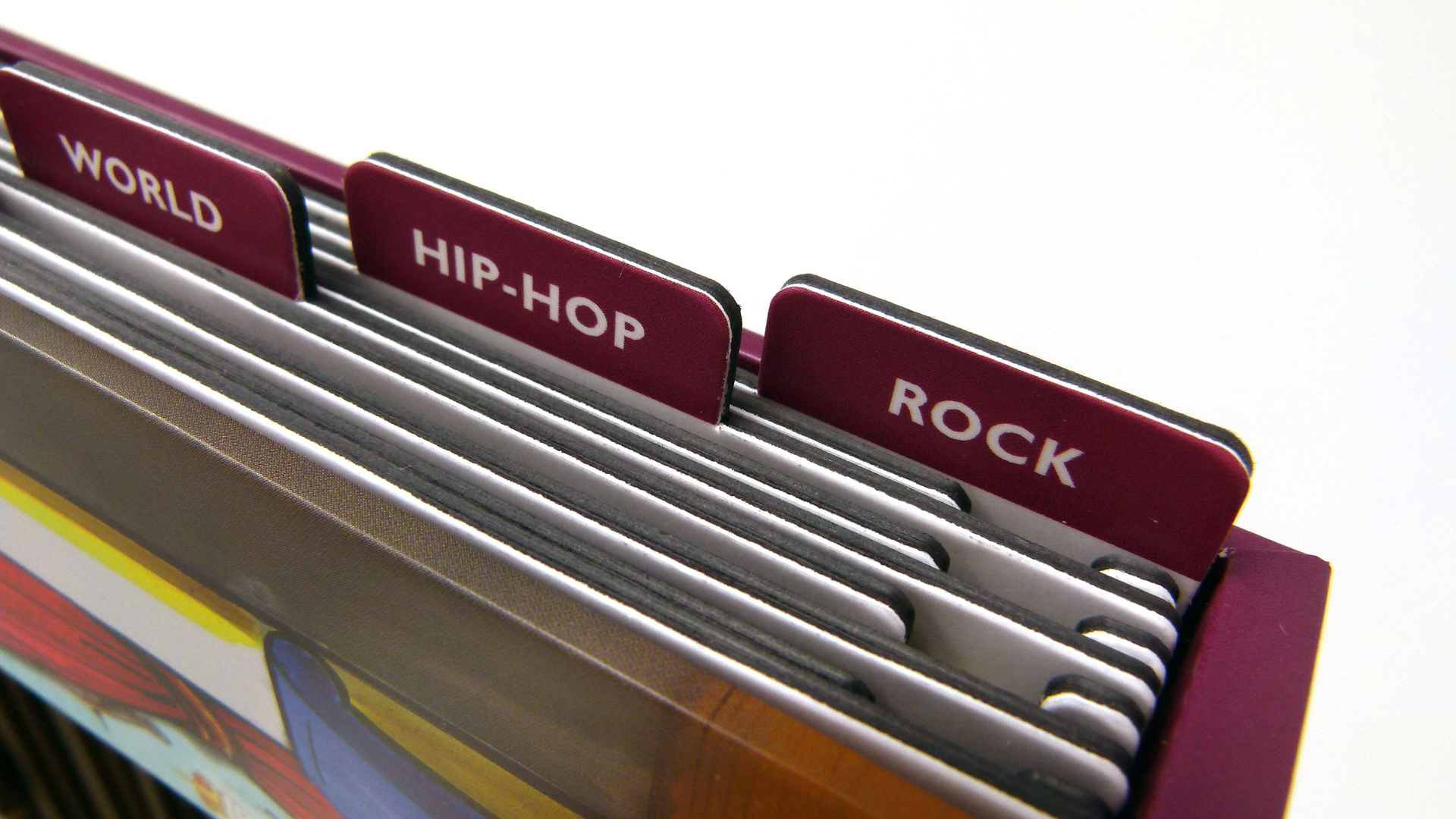 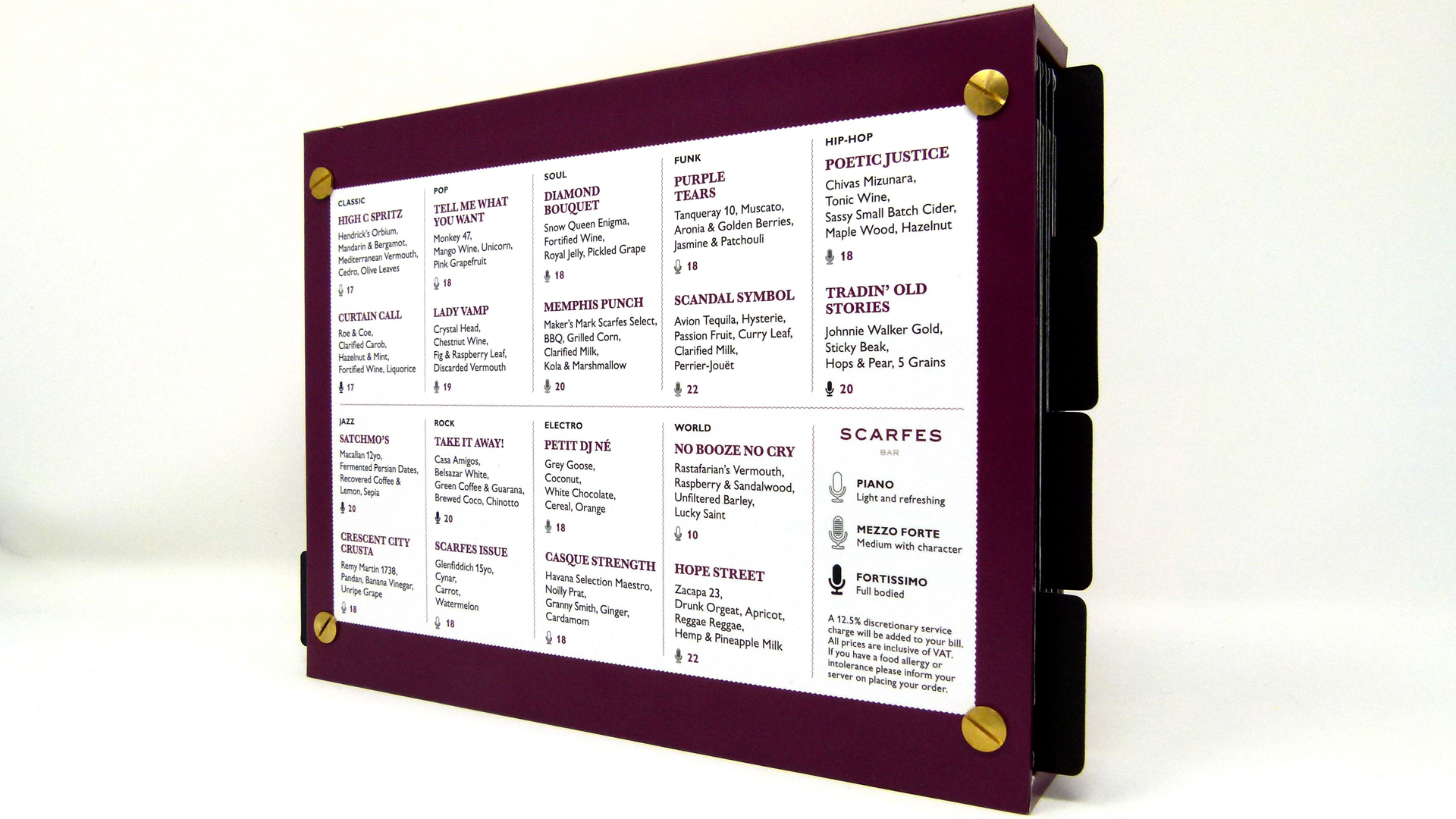 Each card contains a different cocktail type based on a genre of music, including Funk, Pop and Rock. Pulling the tab on any of these slides out the card to reveal not only the drinks on offer under “Pop,” let’s say, but it also slides “onstage” a Scarfe-drawn caricature of a famous artist from that genre – in this example, the Spice Girls. The level of detail involved here is simply breathtaking. 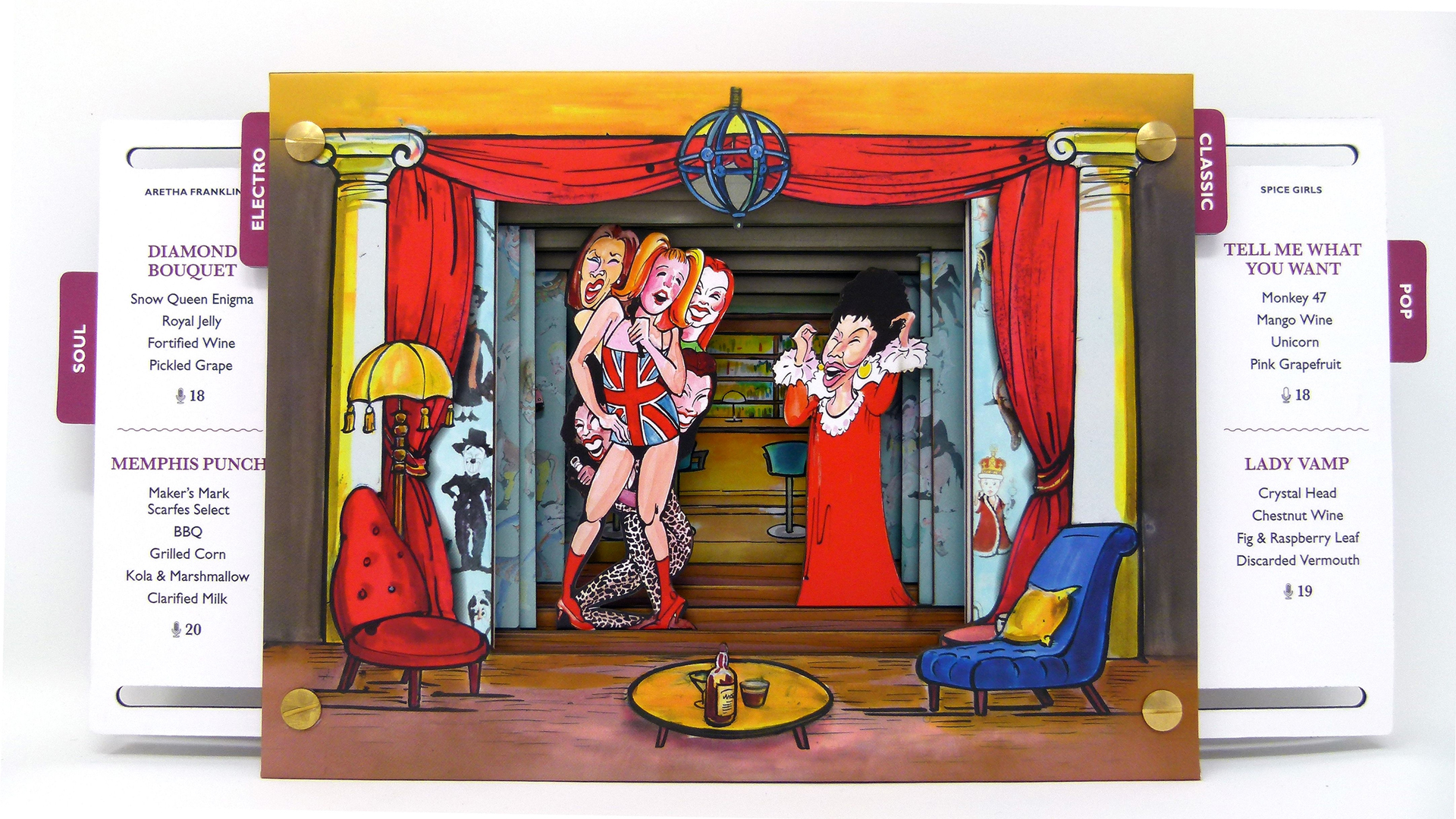 A combination of die and laser cutting were used to create the stage and cards, which were silk laminated for additional protection. Amazingly this whole magical arrangement is held together by just 4 Chicago screws that run through die cut grooves in the cards. 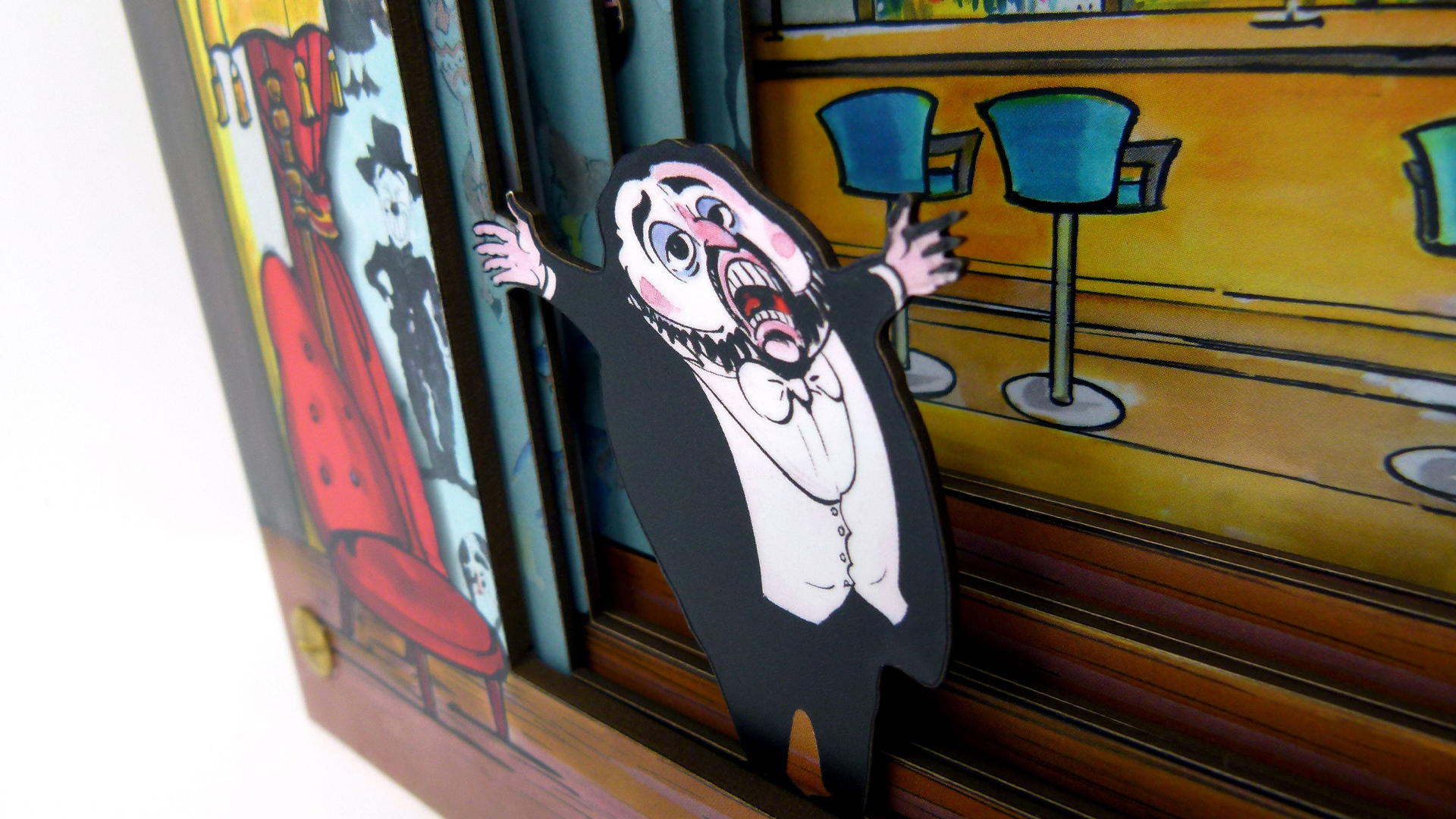 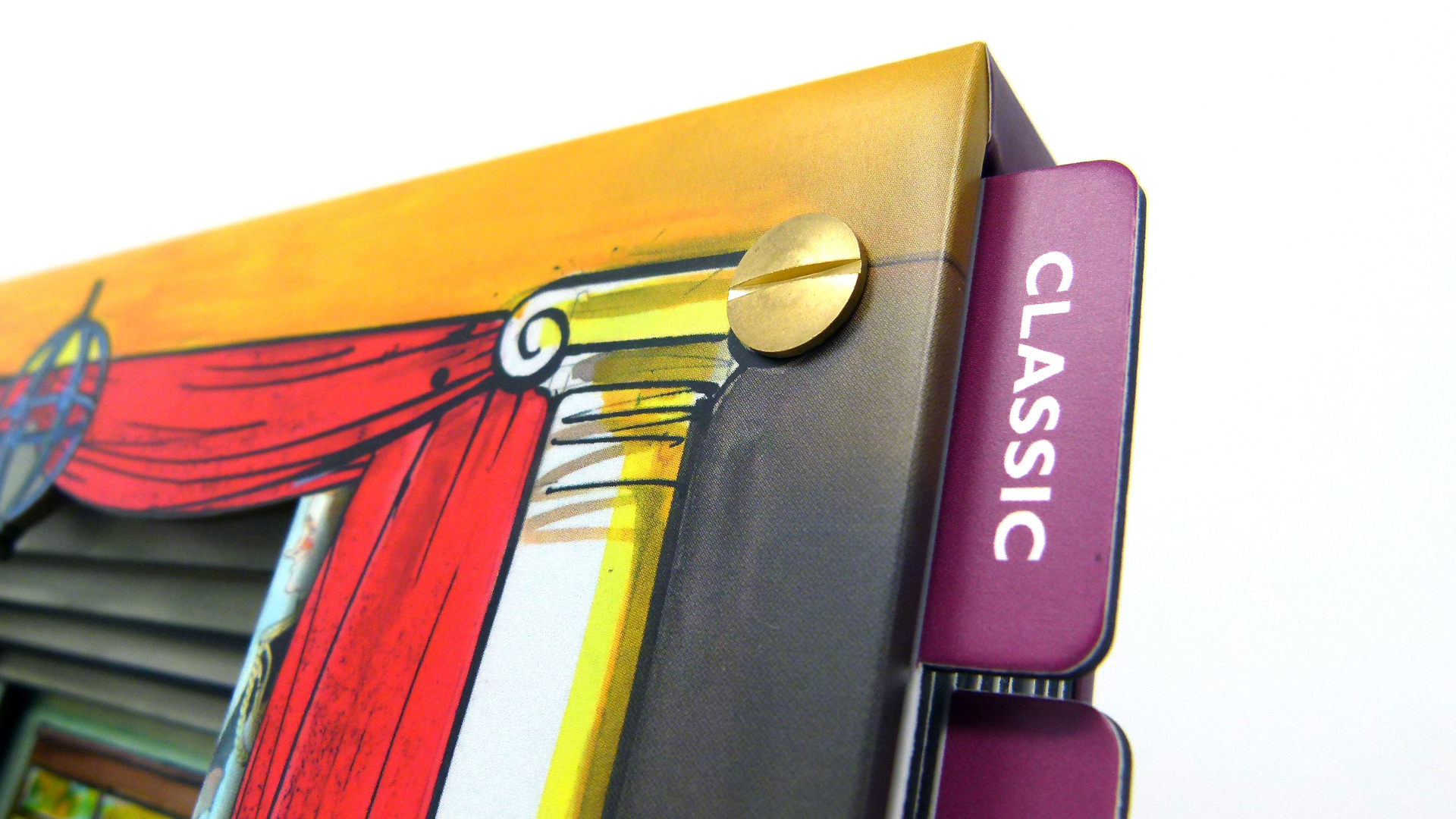 Boss Print has much to be proud of here considering the level of precision necessary to make this all come off without a hitch. It wouldn’t be an exaggeration to say that one wrong note could’ve left everyone…in a Funk 😉

Want one of these menus for your very own? You can pick one up at through Scarfes Bar’s website here.