In 1918, the first koi was born in Niigata, Japan where the Imayotsukasa Saké Brewery has their brewery.

It’s not often you can say a product is incomplete without its packaging. But feast your eyes on this gorgeous presentation of Nishikigoi saké, whose name is Japanese for the colorful koi fish we know stateside. A simple-yet-distinctive die-cut window in the box designed by Bullet Inc. transforms an already beautiful red-on-white bottle within into an intriguing three-dimensional imitation of the saké’s namesake fish. 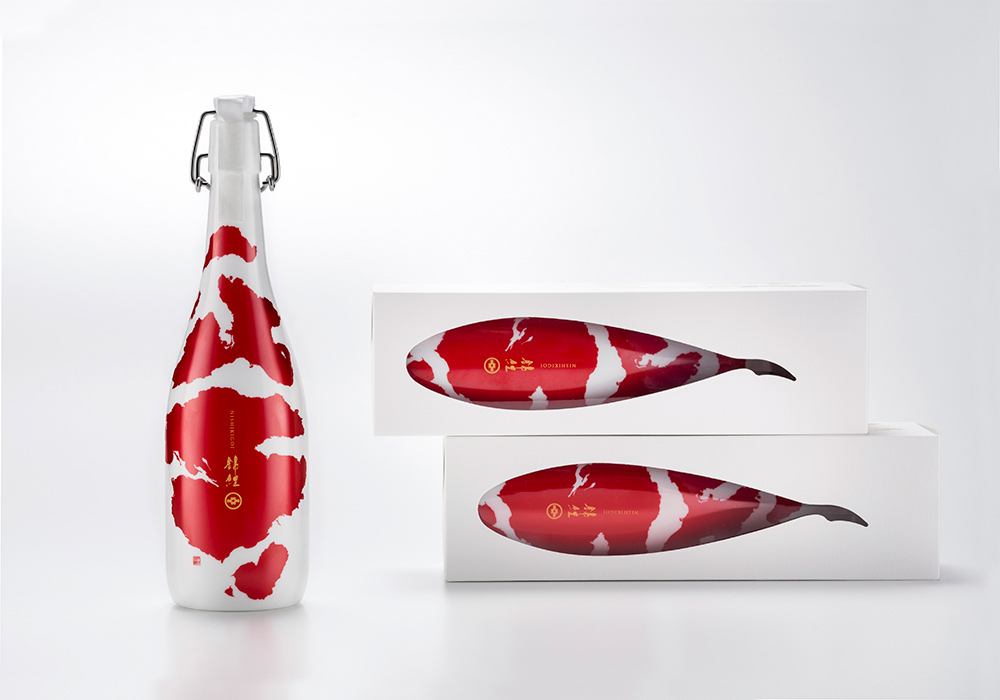 “Because ‘Koi’ has a unique bottle appearance it is able to appeal to the people who don’t drink saké much,” says Bullet Inc. Art Director Aya Codama, before adding, “Of course saké lovers are also our main targets.”

Of course Japanese artisans are known the world over for their keen attention to detail, and that reputation is reflected wonderfully here. The “Koi” saké, produced by the Imayotsukasa Saké Brewery in Niigata, is distributed in a bottle artfully crafted by the Yamaharu Glass Co. The distinctive red-on-white pattern mimics that of the kohaku variety of koi, which is probably the best known in North America. Even the stopper seal boasts a little artistic flourish: a gold foil fish silhouette. 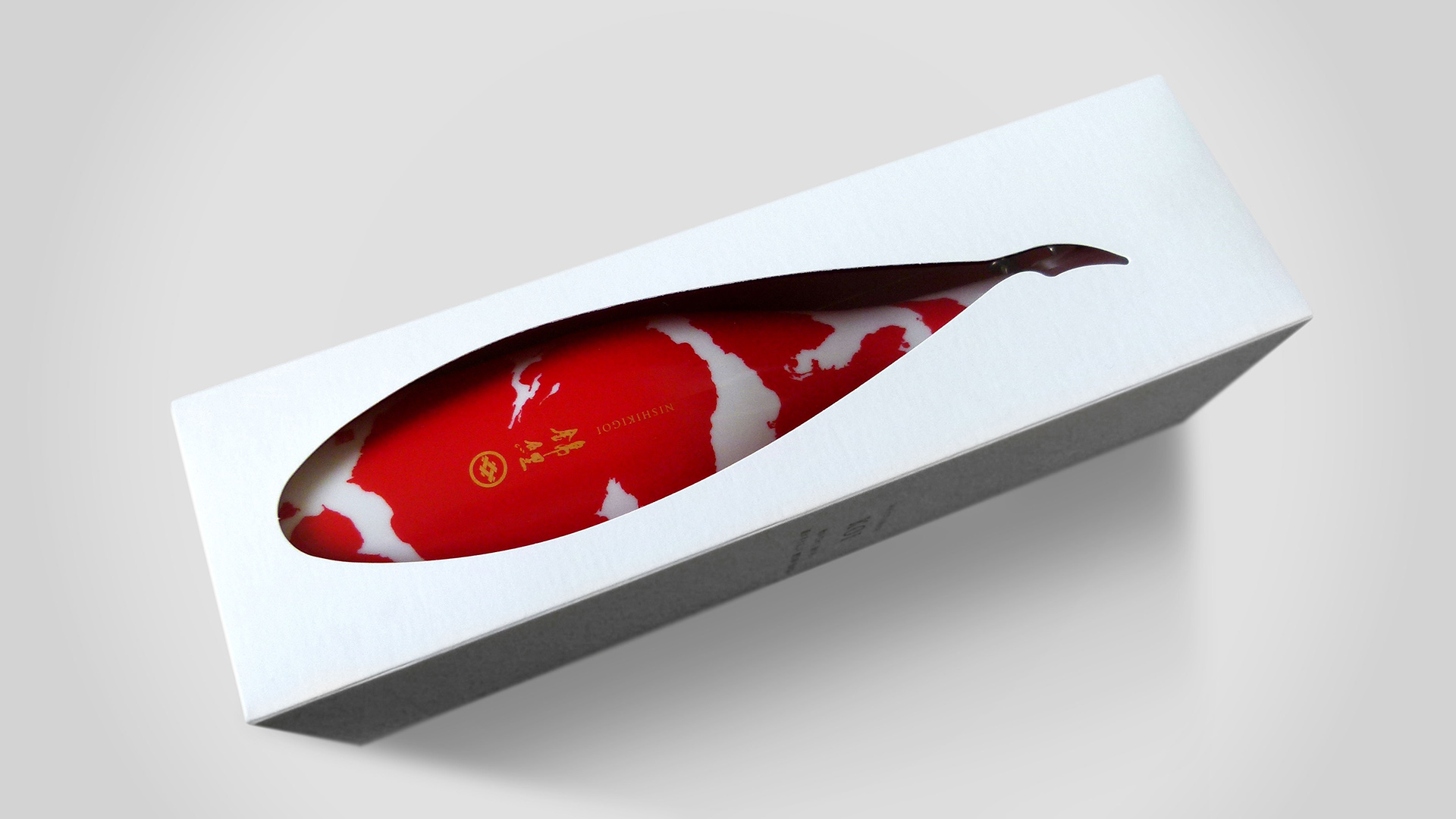 But this is PaperSpecs after all and so our attention is quickly drawn to the box, constructed of sturdy 335 gsm Takeo KIHOUSHI-C deep rough paper. On one side, printed in metallic gold foil by Taiyo Printing, are the beverage’s name and details. On the other, enormous kanji beautifully executed in traditional Japanese calligraphy (or “shodo”).

And yet it is the die-cut koi shape that truly makes this packaging come to life. More intriguingly, though the bottle and the box are attractive in their own right, the bottle INSIDE the box creates a visual experience that is far greater than the sum of its parts – putting the “oy!” in “koi” if you will. 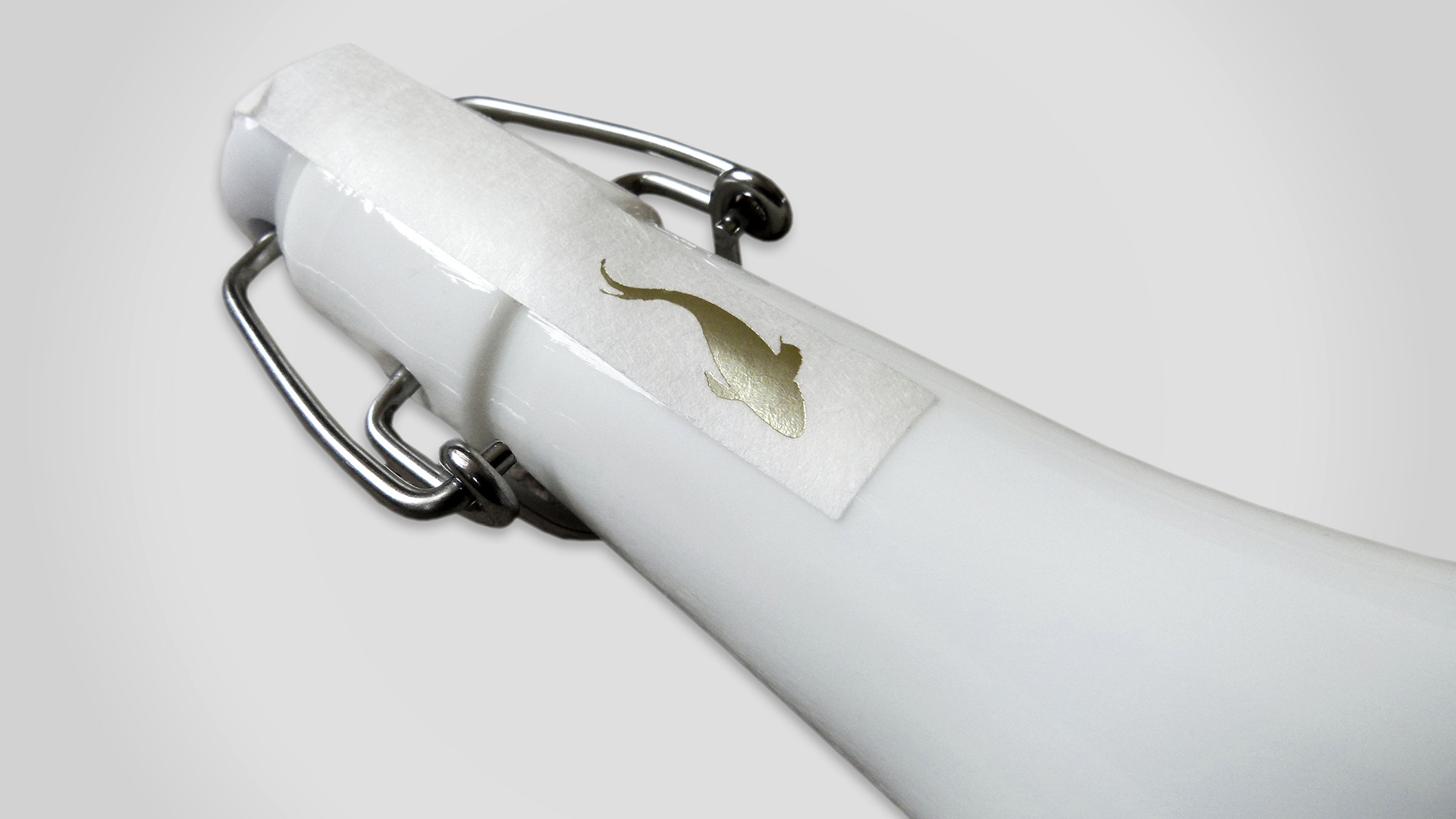 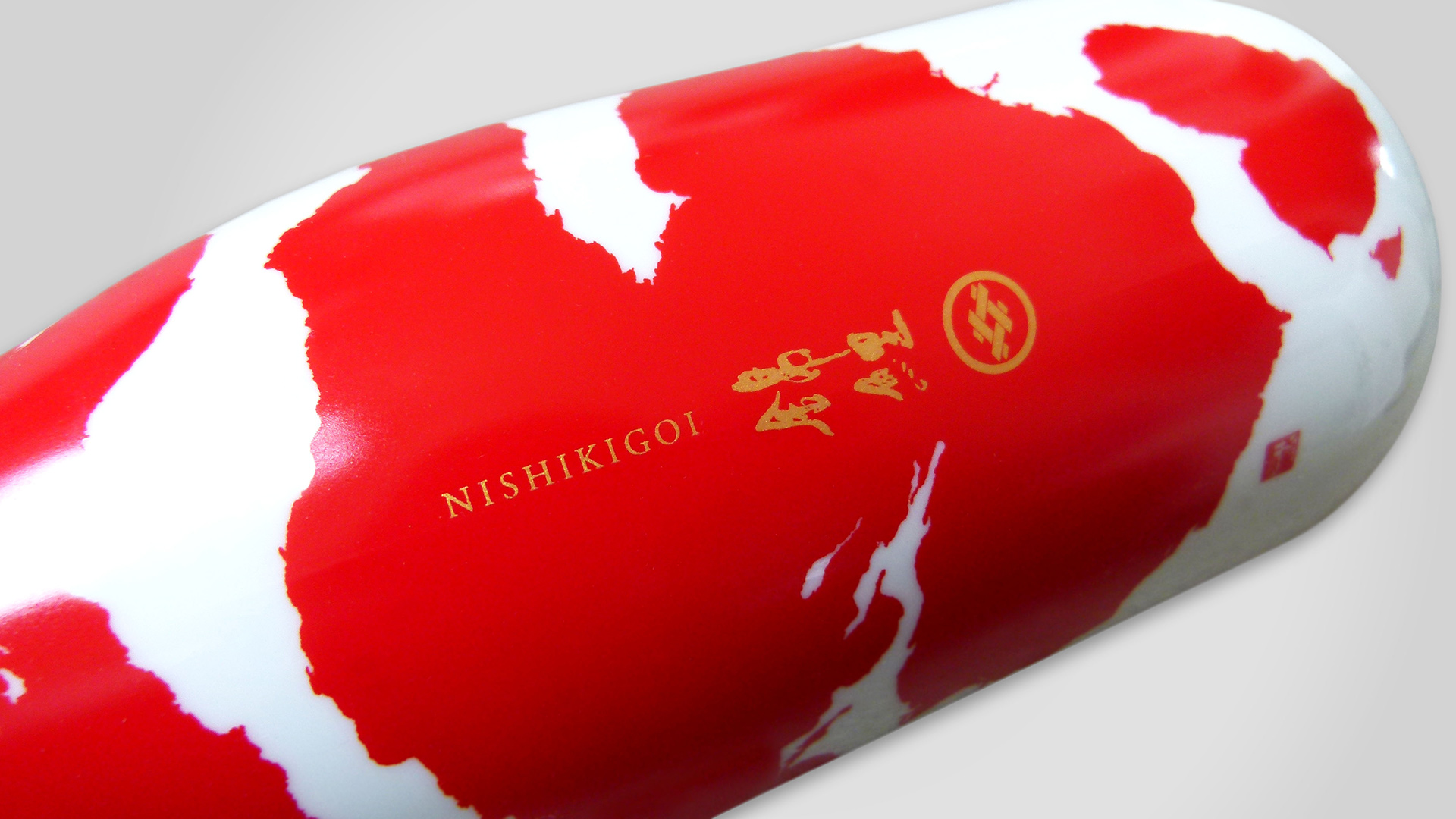 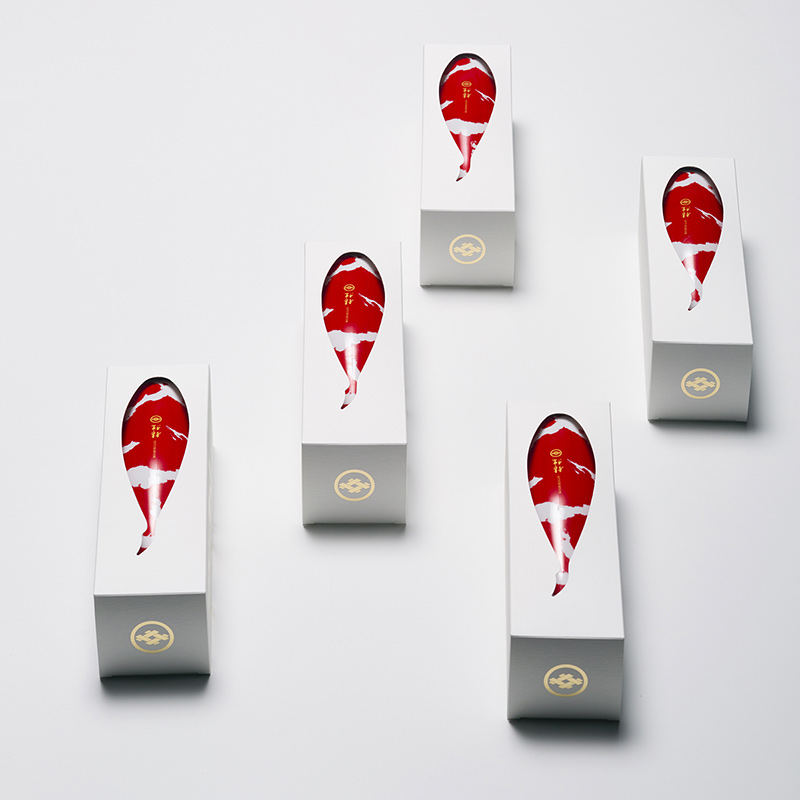 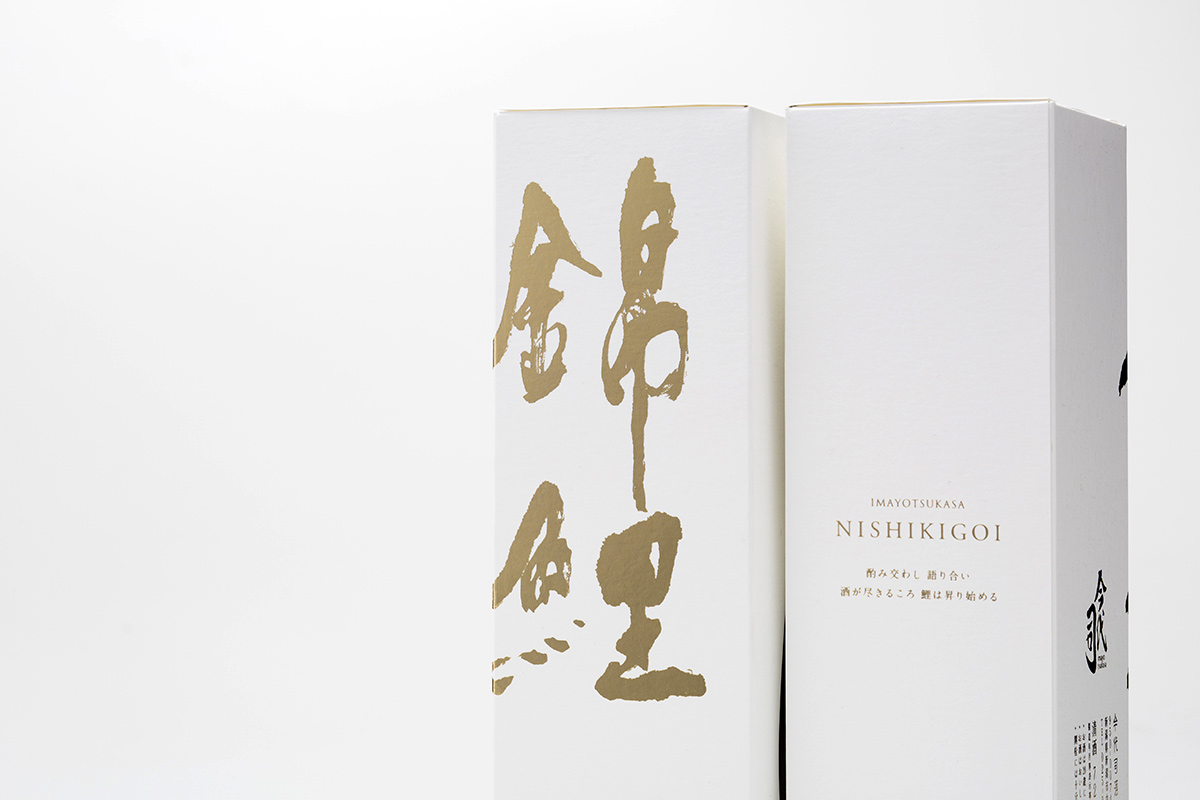