In 1959 revolution was in the air, especially in the creative world, from the founding of Motown Records to the groundbreaking for New York City’s Lincoln Center, America’s first modern performing arts venue. It seems only fitting then that when the institution threw its 60th anniversary gala last year, the invitation was crafted using the latest in revolutionary print technology: digital printing and foiling! 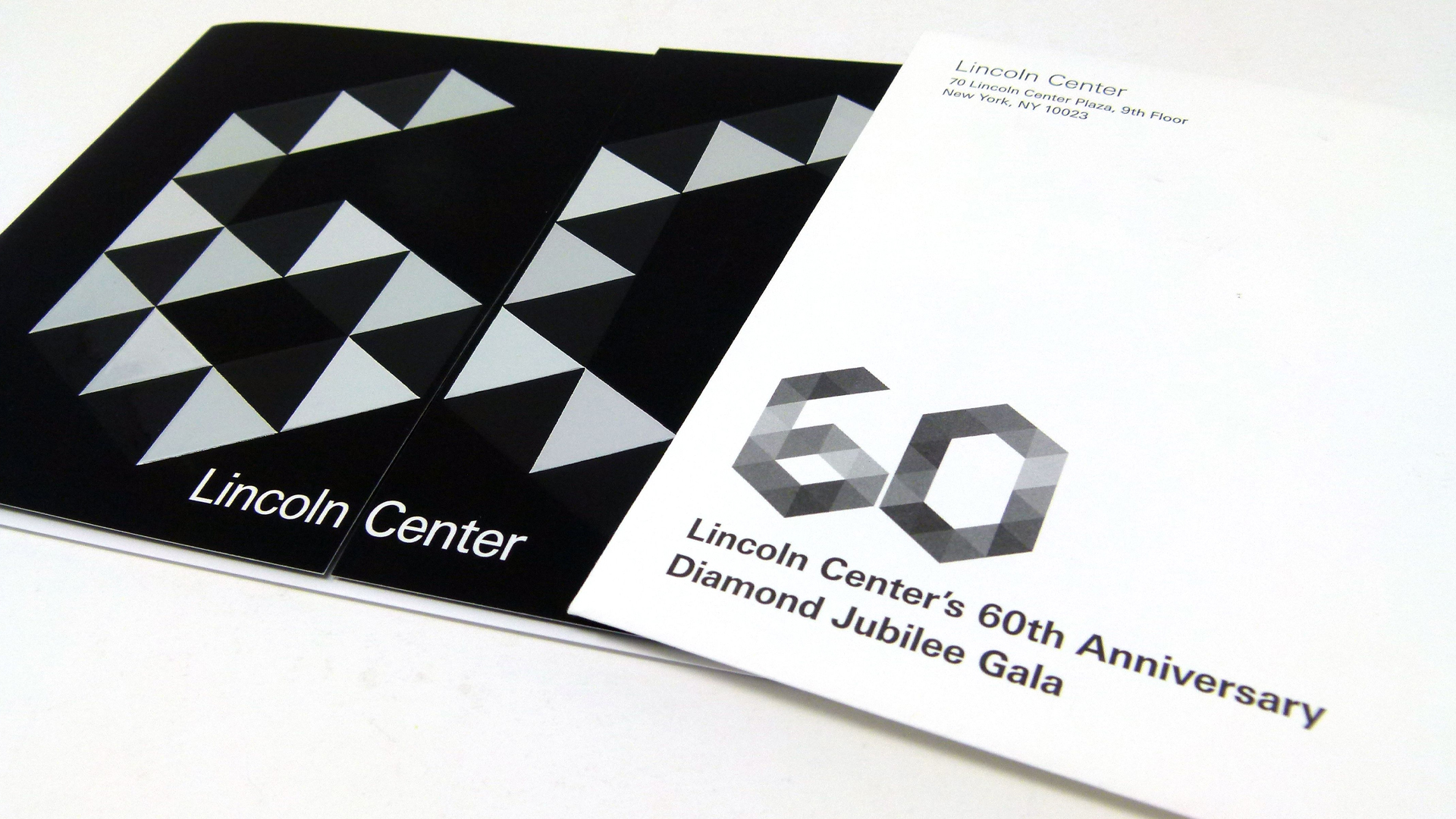 60 Years of an American Original

Over the last six decades, Lincoln Center’s 11 constituent organizations have played host to a stunning variety of performances in the realms of music, dance, opera, film, theater and arts education; everything from the films of Charlie Chaplin to Kanye West’s 2019 Christmas opera, “Mary.” Even those who’ve never set foot in New York may know it from the PBS broadcast performance series “Live from Lincoln Center,” which has aired since 1976. In other words, it doesn’t get much classier than this. Which is why the Center wanted to go all out with the invitation for its Diamond Jubilee Gala, while still remaining dignified and reserved.

Soft and Glittery: The Invitation Holder

Working closely with Lincoln Center’s in-house designers, printer Highresolution (projects / website) developed a smart invitation suite that impresses the moment you ease it out of the digitally printed envelope in which it arrives.

The sophisticated invitation holder stuns, first because of the fact that though it’s nearly all Black, it was actually digitally printed CMYK on an 80 lb. White Verso Blazer Digital sheet [Get Swatchbook], with only the words “Lincoln Center” knocked out to show through on the front. It was then treated with a soft-touch lamination for creating that instant, tactile connection between recipient and piece. 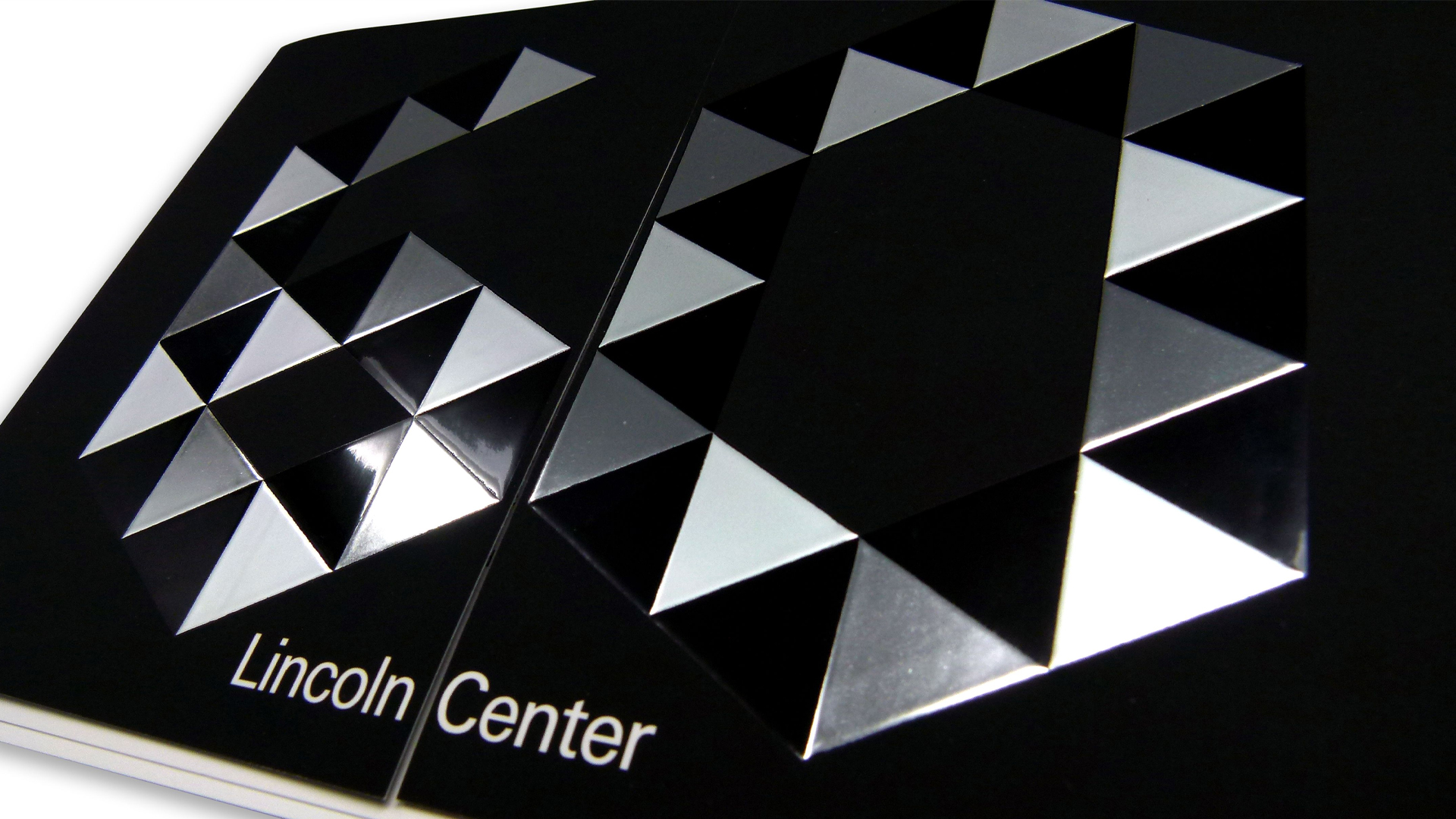 Finally, 2 different Silver Scodix digital foils were applied to the front, as well as ScodixSense – a clear raised polymer – all to create a clever pattern of triangles that form “60,” emphasizing the center’s anniversary. The feel of the sleek foils and polymer also complement the rose petal feel of the soft-touch treatment making this a piece you simply can’t bear to put down. Opening the gatefold holder reveals another triangle pattern on the inside flaps, this time using raised polymer only. [PRO members: For much more on Scodix digital foil, click here.]

Inside, the invitation suite consists of 3 separate cards: 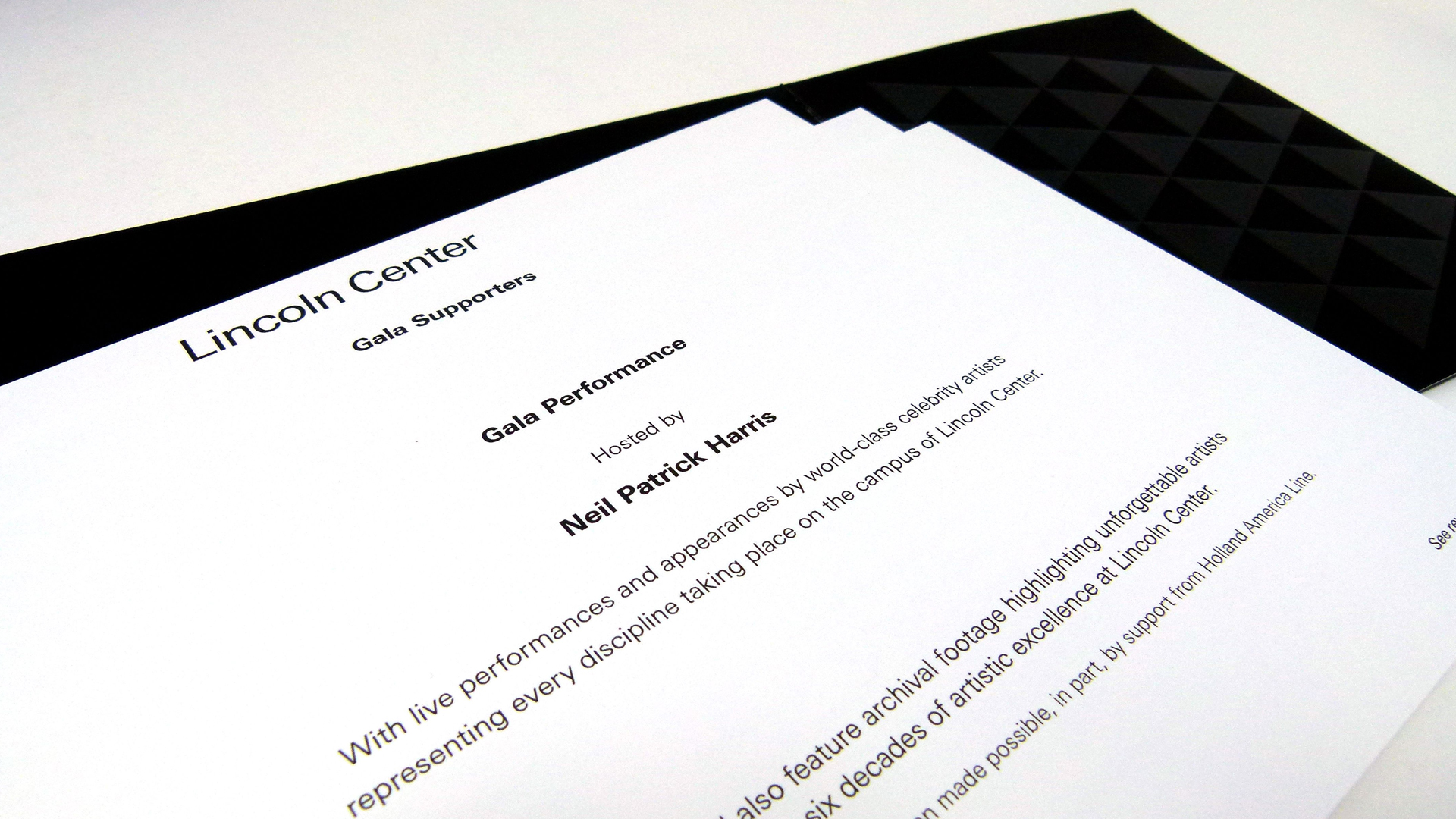 All inserts are digitally printed on International Paper Accent Opaque [Get Swatchbook], with the last printed on 120 lb. Cover and duplex laminated for that extra substantial feel. 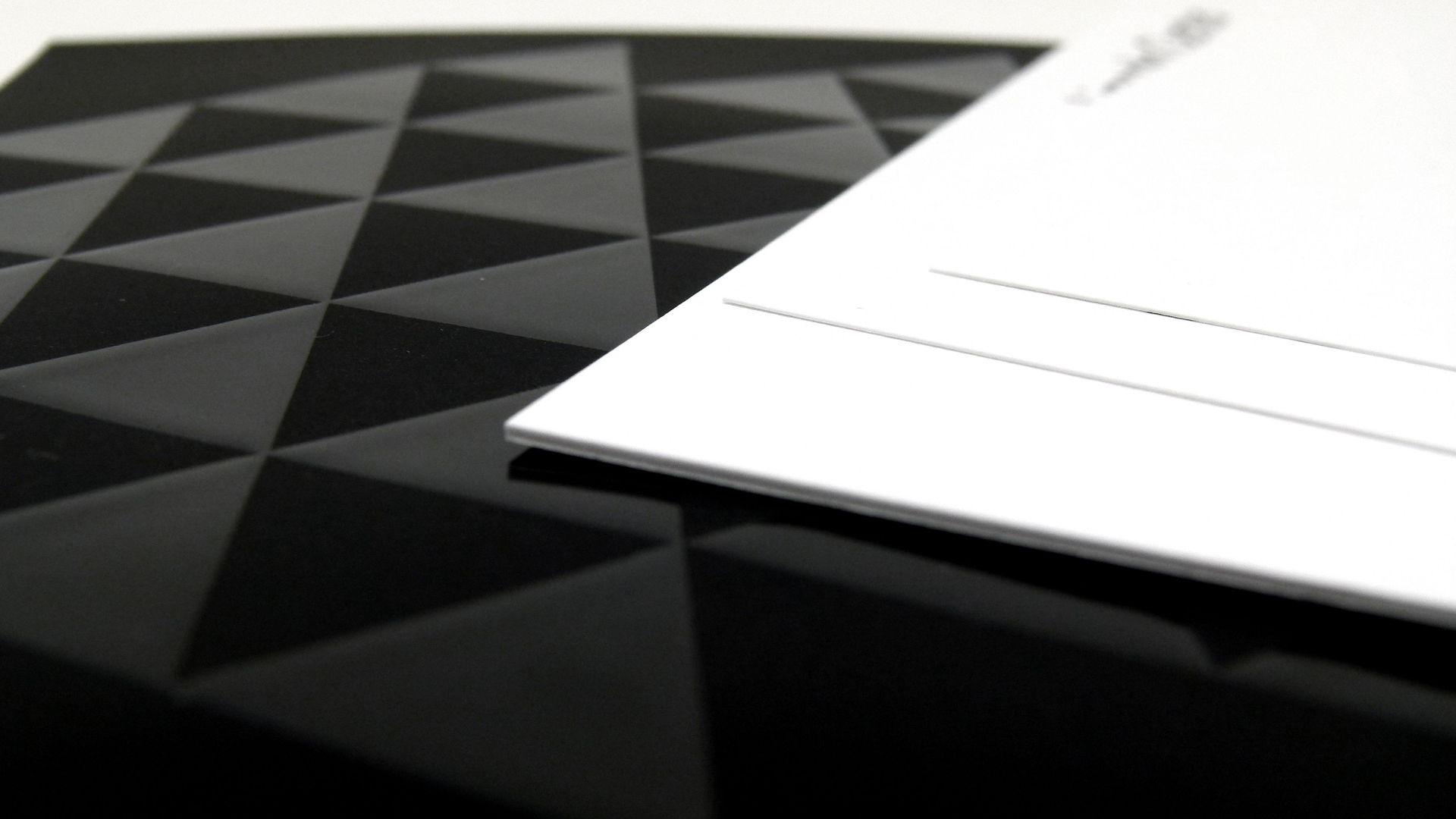 Removing these reveals a final blurb about Lincoln Center’s 60th anniversary on the inside of the holder in White. (Remember the White is knocked out of the rich Black.) 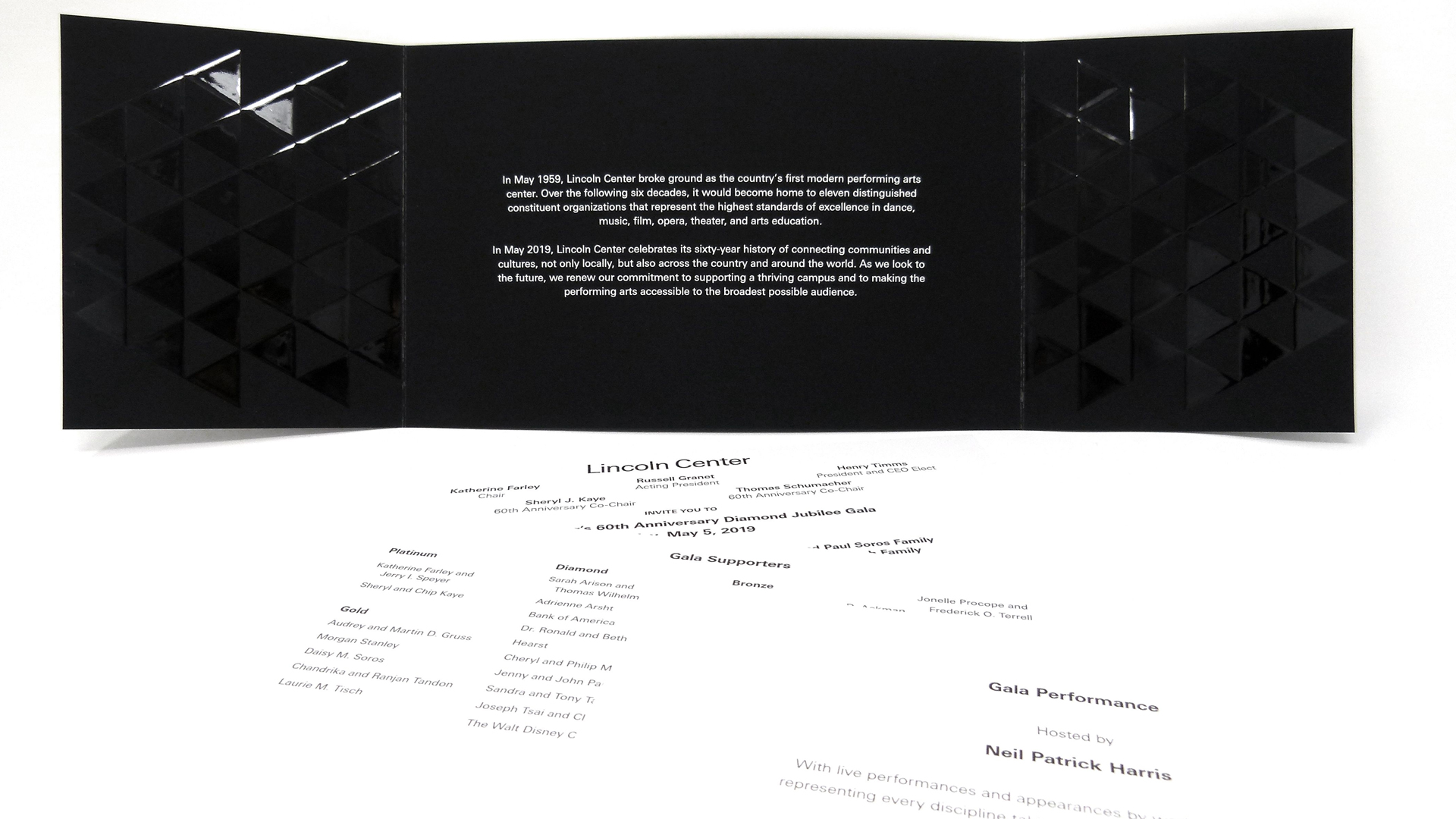 Drinking in the simple elegance of the invitation holder, it’s easy to miss just how challenging this was to produce. What made it so difficult? The number of times each sheet had to pass through the press!

First there was the Black background which was digitally printed, then soft-touch laminated, followed by the application of 2 different types of Scodix foil and ScodixSense on one side, and all done again on the inside – minus the foil.

As it turns out, Lincoln Center wasn’t the only thing that turned 60 last year – Xerox released the first plain-paper copier in 1959, too. Which, when you think about it, shows just how far printing has come!

If mention of the Scodix digital foiling system piqued your curiosity, prepare yourself: There are many other ways to apply foil to your work, too, including several digital ones. Find out about them all in our free Foil Cheat Sheet – download it now! 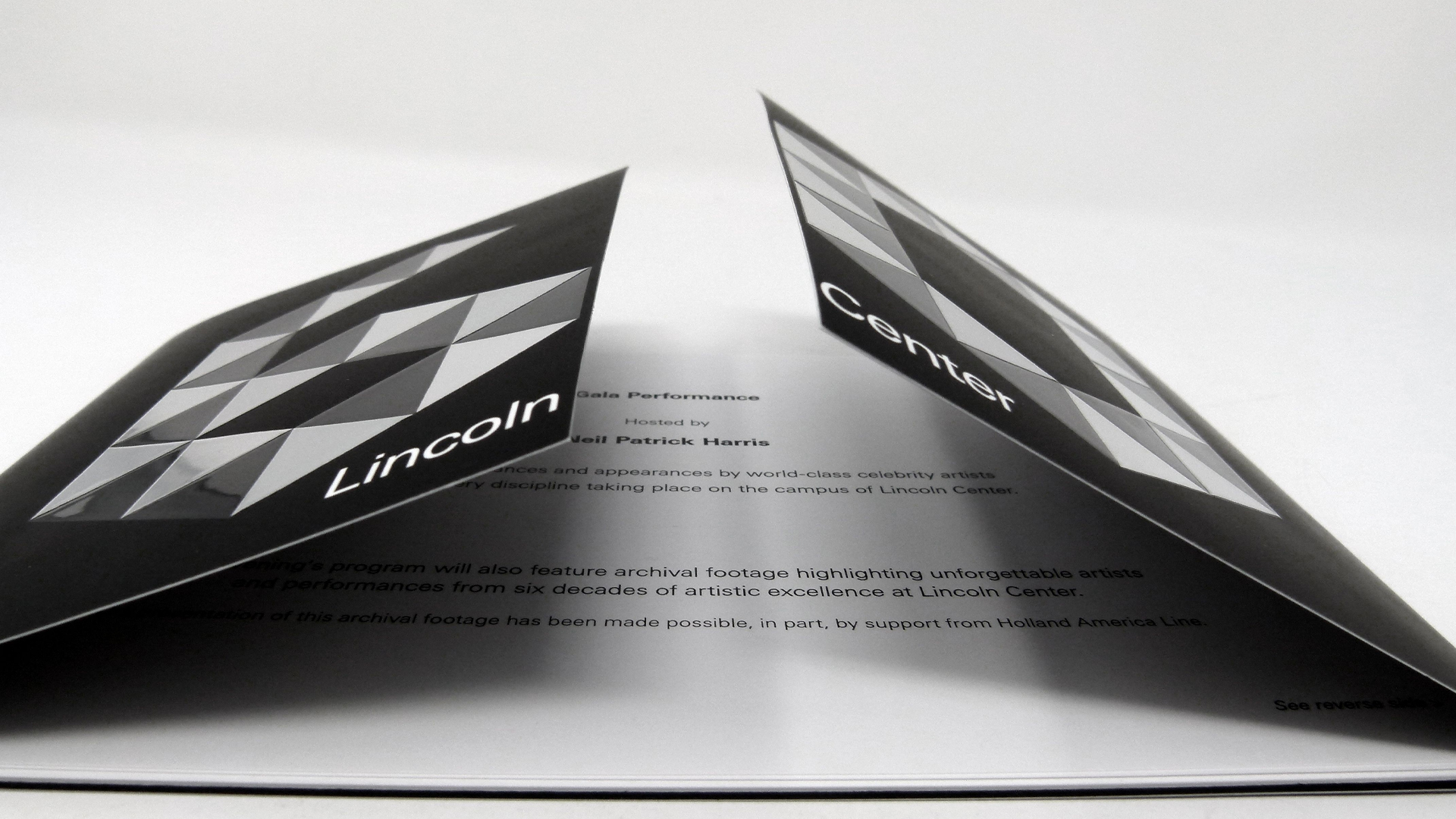