Being humble is a core Malaysian value, and we wanted our design to reflect that by depicting a traditional goat barn.

Some people like to “travel the world” by watching crime dramas from overseas (“Wallander,” anybody…the Swedish one, anyway). We like to sightsee by joyfully experiencing designs from around the world, learning about new cultures as we go…even when it sometimes lands us in the barn out back. With the recent Chinese New Year only a few days past, we revisit a truly charming piece of packaging with a related theme.

“Keeping with the Chinese tradition of exchanging gifts during gatherings on Chinese New Year, we featured goats as 2015 was the Year of the Goat,” explains Sean Lee at Malaysian creative agency Eminent, about their choice of promotion for Japanese papermaker Takeo. “The goat barn is a familiar scene in Malaysian villages and we went for a nostalgic look and feel.”

That “look and feel” were applied to this sweet packaging that is as highly detailed as it is whimsical. The individual “goaty” Mandarin orange holders are cute, certainly, but what really impresses is just how realistic the barn box looks. 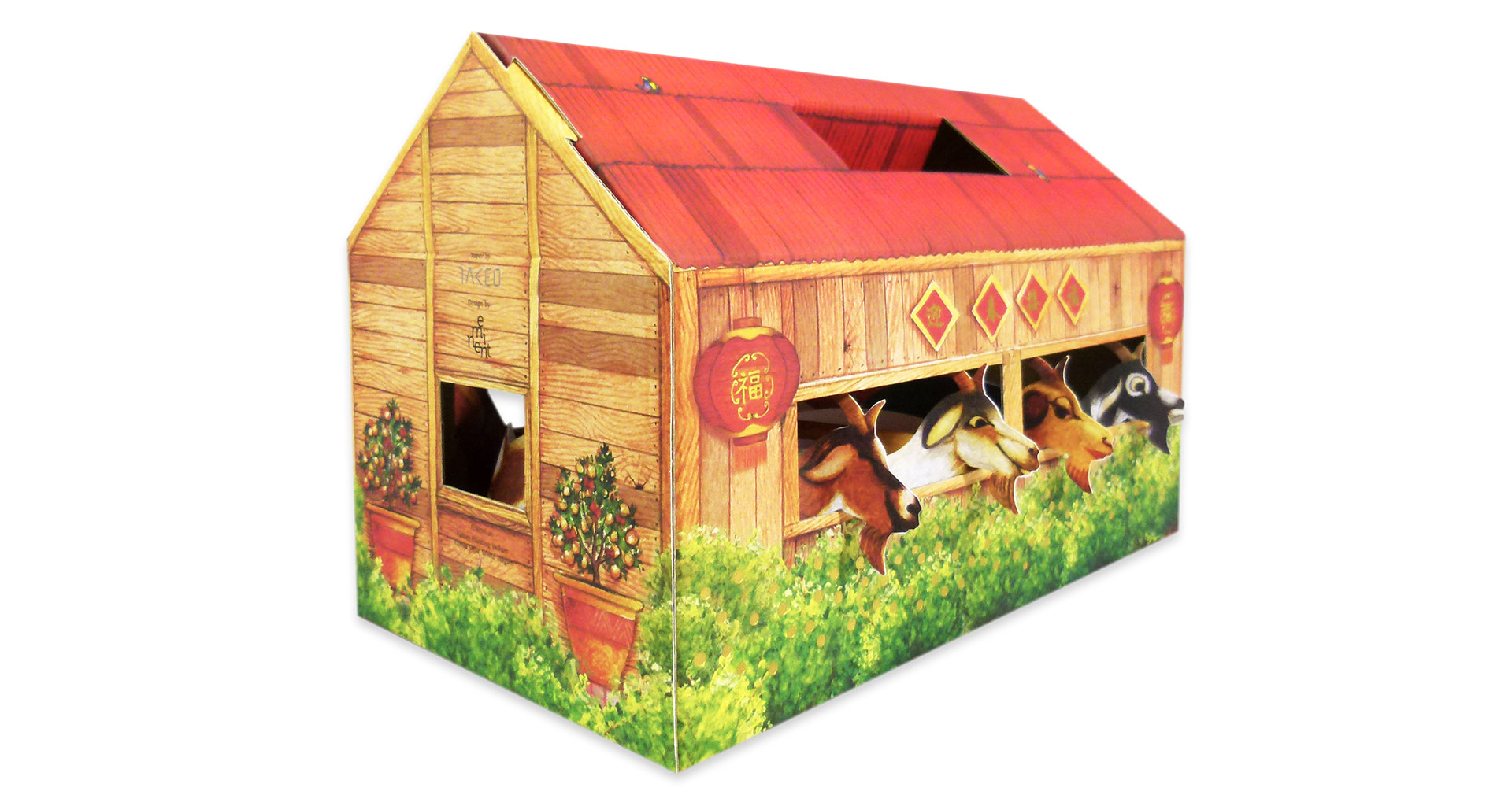 “We decided to go back to basics – everything was hand drawn using mixed media,” says Sean. “We also studied the Malaysian barn carefully, right up to the smallest details, and picked the right elements for our design.”

The individual pieces of wood that make up the structure really look like individual planks with differing hues, grain directions – a few even have knot holes. Trace applications of gold foil are used sparingly here, mostly to add a bit of bling to the festive elements on each side: on the Chinese characters and some dotted “blossom” highlights in the bushes beneath the windows.

The barn was made by using “interlocking fold mechanisms, which could hold eight Mandarin oranges,” Sean explains. “Each one had to be hand-glued, and shredded paper was included at the base to make it realistic.”

And that’s the crazy thing – you almost forget that this is all paper, offset printed CMYK on Neenah Paper Eames Painting Vellum Solar White 216 gsm with a soft vellum finish that was then duplex laminated onto fluted cardboard.

So effective is this as a paper promotion, you can easily see this resting on a shelf near your desk, each goat carefully returned to its place in the barn window, long after “The Year of the Goat” is a distant memory. 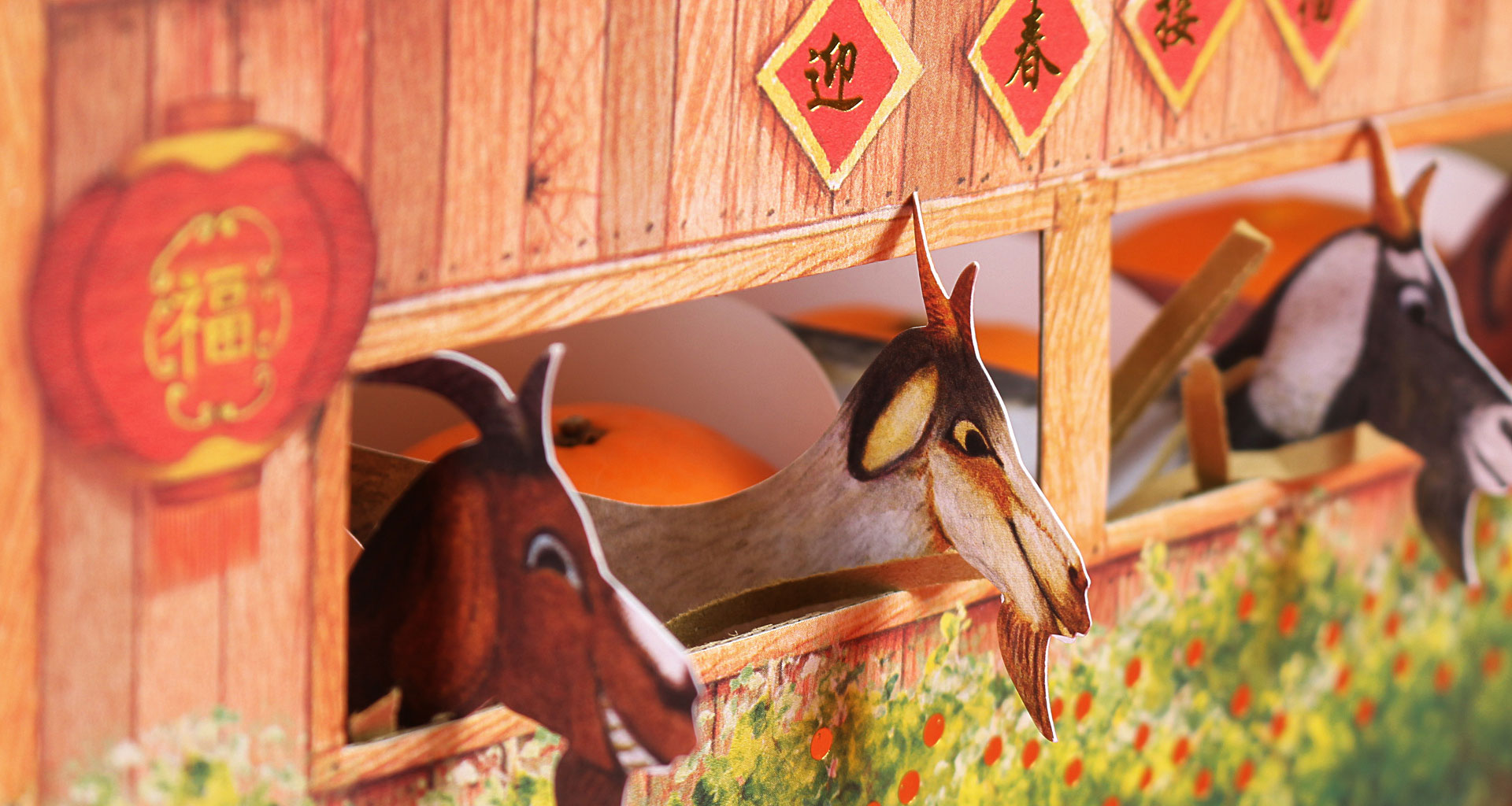 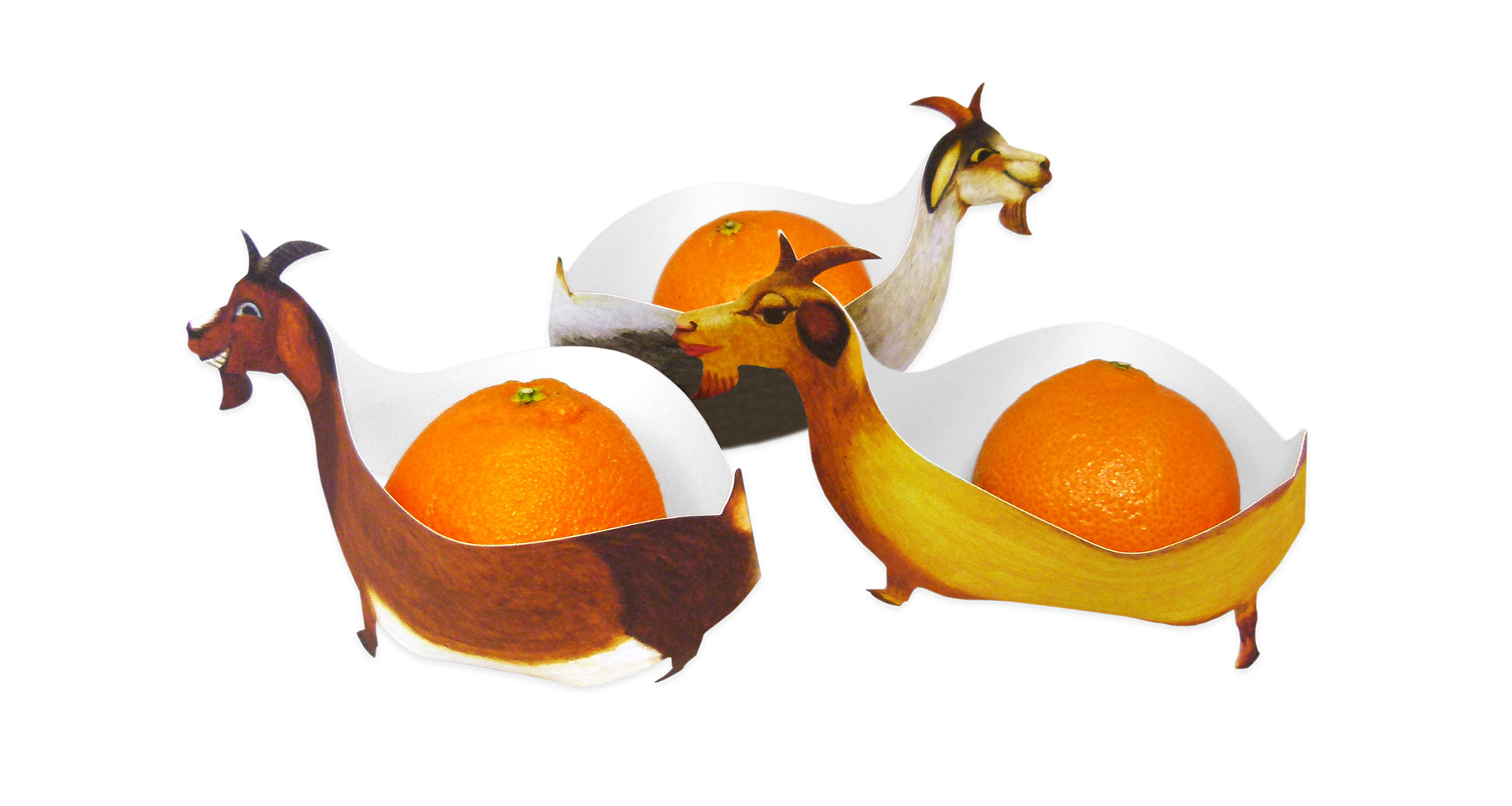 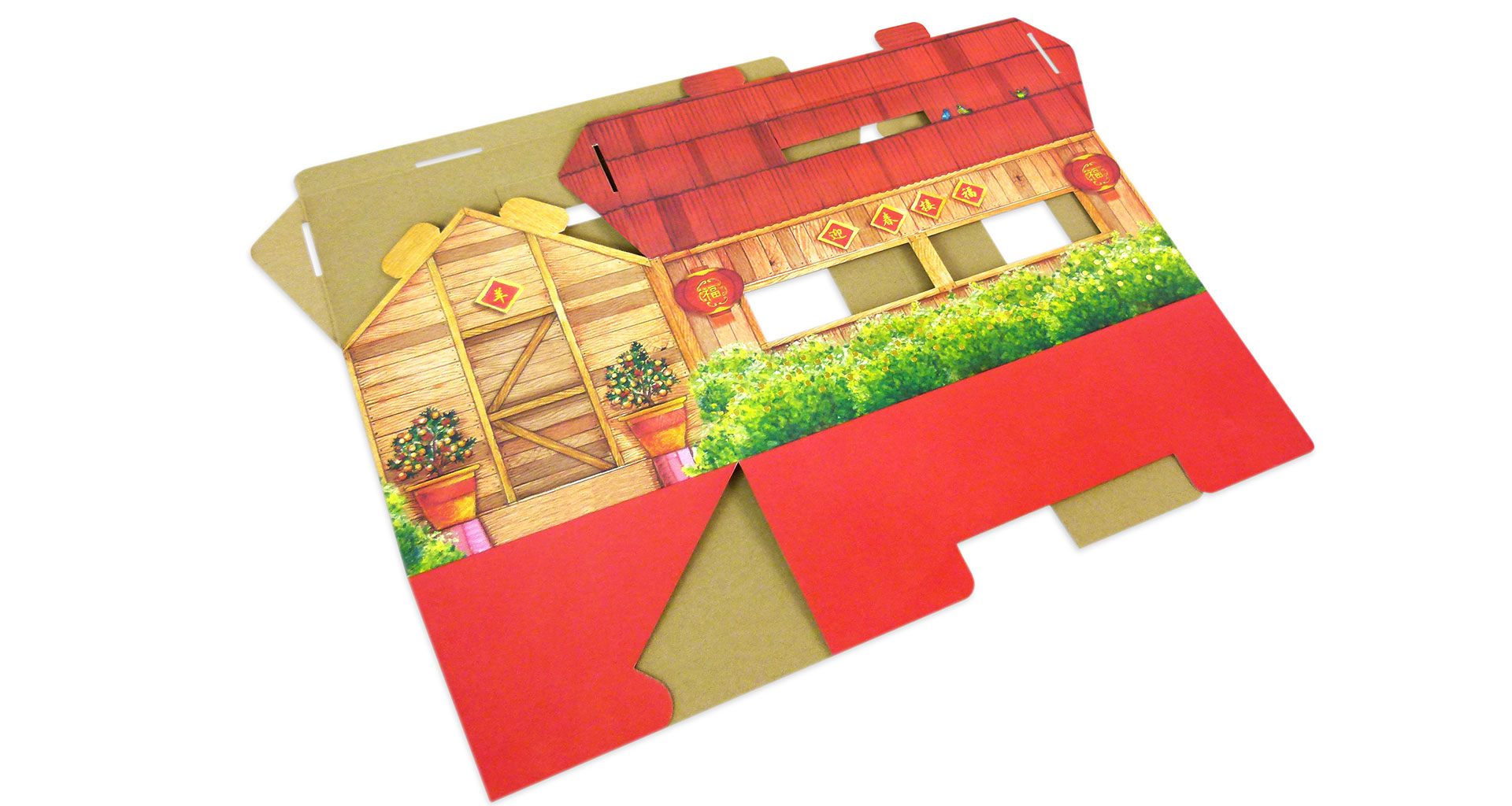 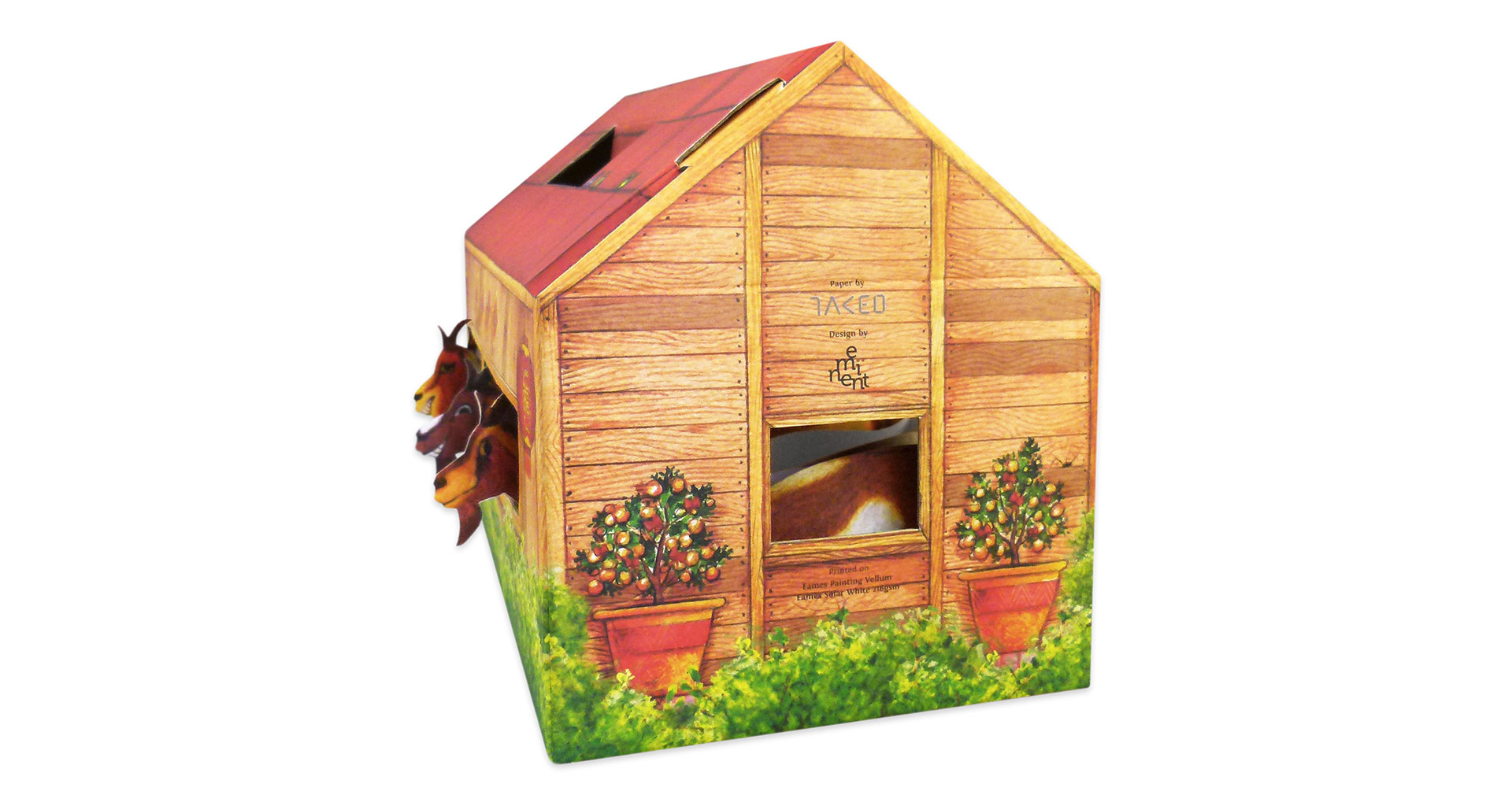