Scooping Up Comics and Cereal 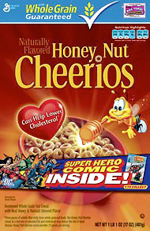 So which were you – the kid who fought with his mother to save those precious comic books from the trash or the one who wishes he had?

Comic books are one of the first pieces of reading material that a child chooses on his or her own and one that many adults still love to read (ever hear of that little event known as Comic Con?).

It seems that General Mills will be offering custom editions of DC Comic’s Justice League comic books in specially marked boxes of its cereal. In a great example of cross-media marketing, the campaign will send readers of the 5 x7 printed pieces to a micro-website that continues the story lines.

You can get the full scoop (pun intended) on the deal between General Mills and Time Warner in a New York Times article by Stuart Elliott.