Infographics and the Slippery Slope

While infographics have been a mainstay of modern life at least since USA Today’s debut in 1982, they seem to be everywhere today. Unable to make their own data interesting, clients are increasingly asking that this information be jazzed up visually.

In the process, more graphic designers are finding themselves debating the ethics of what they’re being asked to do. Data-visualization specialist and graphic designer Carla Uriona takes a stab at finding a compromise between client expectation and artistic integrity.

There are times when, as designers, we may be faced with a choice to compromise on how we present data. The compromises we agree to – or reject – are as important to our field as anything else we do.

A friend related to me a recent conversation in which an art director who, when presented with a bar graph of extreme values (very high and very low), asked the designer to “fudge” the size of the smaller bars. (They were visible – not hairline – but too small to comfortably fit the values inside of them. Presumably the art director wanted to nudge them up so that the numbers would fit inside the bars.)

My initial reaction was er… not favorable. I felt like a mother bear protecting her cubs. (The cubs, in this tortured analogy, being the data.)

The ethics of compromise
I polled a few designer and non-designer friends. Was this a bow to art or clarity? Was it an unintentional breach of ethics or a well-intentioned attempt to make information easier to understand? Was it goal-driven or just lack of creativity?

(Don’t jump on the art director just yet. This isn’t about the choice that person made. It simply reflects the reality that, as in other professions, we’ll all be asked to make choices that, to others, may appear to be inconsequential. We need to make sure we handle these choices intentionally and carefully.)

Here’s what came to mind after my conversations with other designers.

Book-binding: an invisible art
Let’s think about the book-binding trade back in the day. The men (mostly men, anyway) who bound books hundreds of years ago were tradesmen. They had a craft that they revered. They apprenticed and, as journeymen, they traveled from place to place, learning and honing their craft to become – eventually – book-binders. This is not unlike the path that many information designers take today.

I won’t bore you with the mechanics, but suffice it to say that binding a book involved a lot of work, much of which was invisible to the owners. Once purchased, the book was read, perhaps the craftsmanship briefly admired, and then it was shelved or passed on, sometimes for generations (think of the family Bible).

And yet, for all the painstaking zeal and meticulousness put into the binding of the book, the end result was rarely, if ever, examined once produced. Again, not unlike the process of visualizing data, much of the effort and care involved in sewing pages into folios, hand-stitching the spine, remained largely unseen. If the thing didn’t fall apart in your hands you were satisfied. End of story.

Despite this invisibility, these bookbinders pursued their craft with diligence and care. How well or how poorly they plied their trade was not immediately evident, as these old books often outlived their makers. They had no immediate incentive to be unduly diligent. And yet, I like to think that most of them did not cut corners. Why? I’d say it was self-respect and public recognition of the importance of their craft. Maybe I’m over romanticizing books (I do collect them). 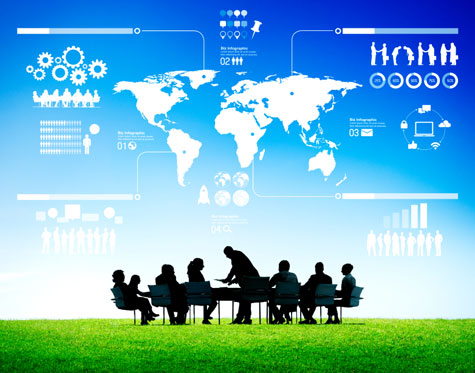 Our craft: Are we short-order cooks or visual content experts?
My point? This is an issue about the ethics of our craft. As designers, we need to ask ourselves this: Are we short-order cooks or visual content experts? Are we hacks or tradesmen/women? Is data visualization a craft or only a paycheck? Is data an obstacle to be overcome or a living boundary that, with each challenge, offers us the opportunity to learn, do better, and to empower our readers by bringing information to the surface in a manner that brings with it a new understanding?

And while, from the perspective of the client (or in this case, the art director), it may not always be apparent that the accommodations they ask us to make are not wise, it is our responsibility to do the right thing, and bring others along. In this way, we advance the field, and our professionalism, as well.

Whatever your intentions, what is the effect of the small compromises that you make in being precise, transparent and correct in how you present data?

The more seasoned amongst you may shake your heads and think that these things are self-evident. But to those of you who are just starting out (be it as younger designers or managers in charge of new data viz projects), this may not be something you’ve thought much about. It may not even seem like much of a big deal to you.

What is the effect of compromise on the designer and the team?
So, what happens when a designer makes those compromises? When I asked a few designers, they all had one response in common: morale and self-esteem. Here’s the thing: Making that one small edit will be invisible to everyone but you. It’s not like your readers will ask you to send them your Illustrator file so that they can measure pixels before they read further. Like the bookbinder who sewed thread onto page folios, no one but you will see the guts of your files.

But making those small compromises weighs on you, wears you down and, worse, makes the next compromise all the greater in scope and easier to bear. And these things add up to the slow devolution of what was once a craftsman/woman (if I may be allowed to use such an archaic term) into a hack.

And what happens when an art director suggests those compromises? Well, you risk losing the respect of seasoned members of your team, that’s obvious. Worse, you risk creating an environment that is progressively sloppy. And while no one will catch the small compromises, they sure as hell will catch the big ones. Remember the infamous Fox pie chart?

Other examples of altering data
It doesn’t stop with information designers, as I’m sure you know. Another designer who Photoshops medical imagery (for example, a CT scan or slides of cancer cells) told me about a doctor who, when preparing images of slides for a research publication, asked the designer to darken some areas to make them more visible, thus allowing him to better make his case. The designer balked. These aren’t just pictures, he told the doctor, they’re data.

And if you want a more mainstream example, how about the furor over the Time cover of OJ Simpson in 1994? Or, more recently (2008), the Hillary Clinton ad which featured then-presidential candidate Obama with arguably darker skin?

There may not be room to make the wrong compromises, but there is always opportunity for discussion
No one is perfect. And each of the examples that I gave leave plenty of room for discussion. As a newspaper friend recently noted, some photographers are adamant about not retouching any photos they take, including not cutting subjects out of backgrounds. Others are not as rigid. And not all of the participants in my informal poll reacted with extreme horror at the thought of slightly lengthening bars. Some merely grimaced. But all agreed that if you’re going to tread on thin ice, you’d best be aware of it.

Another friend points out that he noticed a disconnect between his former employer (a newspaper) and his current one (a corporation). He’s doing the same work: designing information graphics. But whilst former journalist colleagues (having their own code of ethics) would never have asked him to fudge the appearance of data, he feels that in his current role as a designer in the corporate world, his colleagues have less of an understanding of and appreciation for what asking this might mean.

This isn’t necessarily a bad thing. Handled correctly, it can present an opportunity for education. But you have to be willing to put yourself out there – a place that not everyone (perhaps less experienced designers or employees with less seniority) is comfortable occupying.

As designers, let us be keenly aware of how the small choices we make for ourselves can add up to large consequences for our profession. I’d love to hear more from you on this. Have you been placed in similar situations? How did you handle them?

Carla Uriona is a Washington DC-based graphic designer. Born in Bolivia, she was raised in Argentina and various countries in South America and – since college – has made the United States her home. Over the past few years, she has overcome her fear of mathematics and is embracing her left-brain cognitive functions, such as they are. Why? Because the interplay between information and art is as emotionally uplifting as a very nice font, or the perfect shade of orange.