Like the Vietnam conflict for Americans, the year-long UK coal miners strike in the 1980s casts a long shadow over the British psyche. No other modern event so clearly demonstrated the division of haves and have nots, leaving in its wake many unforgettable photos, cartoons, union banners, buttons, posters and flyers. And perhaps no other book has so reflected its subject matter than designer Craig Oldham’s new volume, “In Loving Memory of Work,” which collects all of those artifacts in a remarkable way.

To bring those days alive once more, the book is printed in a bespoke typeface, Liaison, inspired by the Liaison Committee for the Defence [sic] Of the Trade Union (LCDTU) placards distributed and used at various demonstrations during the strike. 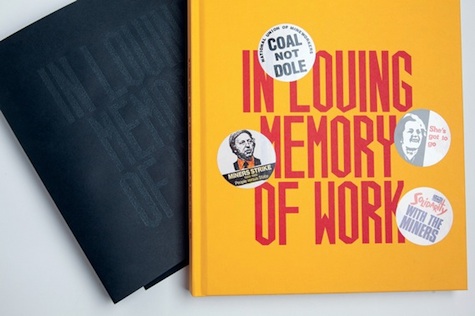 Oldham’s father, a former coal miner arrested during the strikes, obtained the coal (mixed with waste material) from the mining site. It was then ground up by hand and screen printed onto GFSmith Colourplan Ebony. As the author told Creative Review:

“After a bit of thinking, we had the hack-esque thought of manipulating the process used to print glitter onto greetings cards,” says Oldham. “In theory, replace the glitter with the coal-dust and job done. In theory, of course. The catch being we were effectively screen printing, and this idea presented the pretty interesting combination of heated machinery being fed a combustable material. Fun times….

A lot of trial and error ensued until they finally got it to work. As Oldham explains:

“Looking back it all sounds a bit hands-on, but to work with a material that three generations of my family had worked with was, I think, at least retrospectively, a really personal thing for me, that I’m glad I could do and do it in my way, as a designer.” 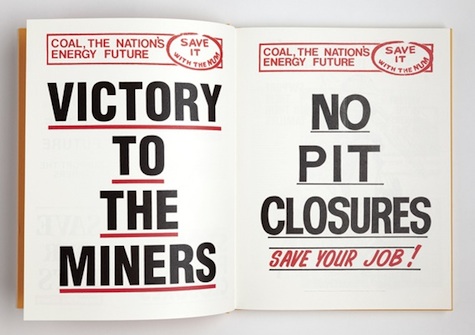 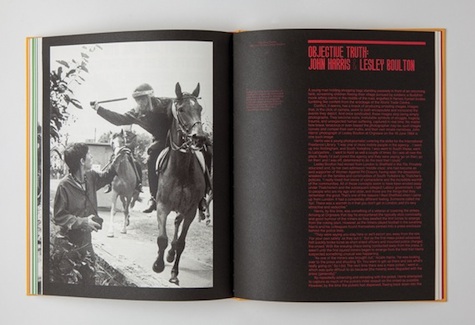