Ads Get Creative to Combat Abuse

First, the increasingly eccentric Dove Self-Esteem Project partnered with Portuguese agency Torke+CC on an ad that ran in Pais & Filhos [Parents & Children], a parenting magazine in that country.

Readers were encouraged to use the pen that came bundled with the magazine to write on the ad the most hurtful thing they could remember being said to them as a child. When they turned the page, they discovered that a piece of carbon paper had transferred those words to the shirt being worn by a particularly vulnerable looking child. “Words mark children forever,” was the accompanying tagline.

Though a clever use of a very old paper trick, Adweek sniffed at what they considered to be a poor metaphor (“A shirt is easily removed and discarded…). Presumably the next campaign would’ve been more to their liking.

Spain’s Aid to Children and Adolescents at Risk (ANAR) went the outdoors route with a large ad. This one appears to show a healthy enough young boy when viewed by adults, but children see him nursing a split lip and swollen cheek. 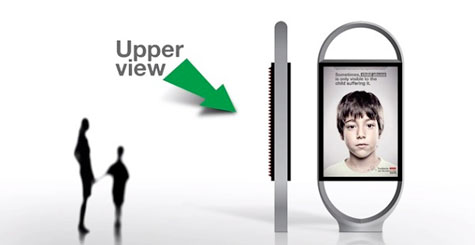 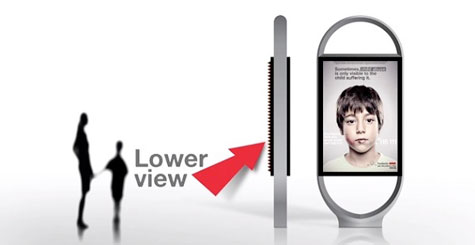 The trick, accomplished by the use of the same lenticular printing that was all the rage on DVD packaging a couple years back, ensures that only viewers about the height of a 10 year old can see the abuse and read a special message: “If somebody hurts you, phone us and we’ll help you,” and the phone number. Adults see another message: “Sometimes, child abuse is only visible to the child suffering it.”

The implication is a chilling one: many abused children are frequently in the company of their abuser, even on the street. Of course the inevitable media exposure the signs have received as a result of their ingenuity probably means these will only be effective for the children of exceptionally clueless aggressors.