Back in the day no one could match Luciano Pavarotti for his ability to woo popular-music and opera lovers alike, nor the flamboyant shirts and scarves the tenor wore throughout his career. I’m sure he would have been suitably impressed by the exquisite music cabinet hand crafted by Linley that was created in honor of the 10th anniversary of his death, and raffled-off with proceeds going to his Foundation. He also would have been in awe of the beautifully designed raffle ticket/holder combination that, like the great man himself, encompasses two different worlds ¬– in this case those of both graphic and product design. Offered at high profile events, and on sale for £100 each, these raffle tickets needed gravitas. 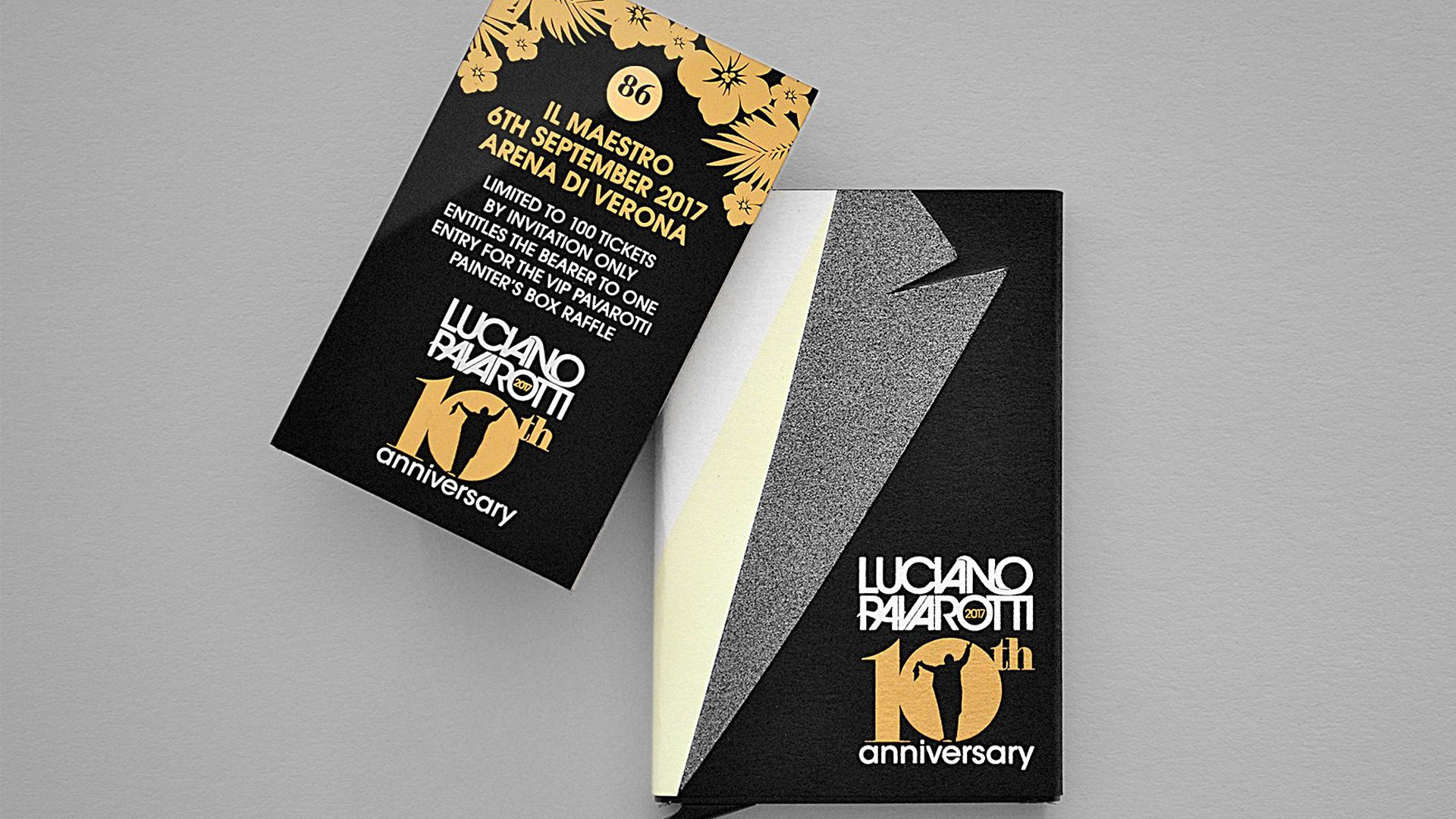 For the ticket itself, designer Jo Stedman of So Creative came up with a floral pattern inspired by Pavarotti’s shirts and scarves, which she had screen printed (along with the 10th anniversary logo and all the wording) Matte White and Gold onto 5mm thick black Perspex acrylic by Bob Eight Pop. So far, so creative. 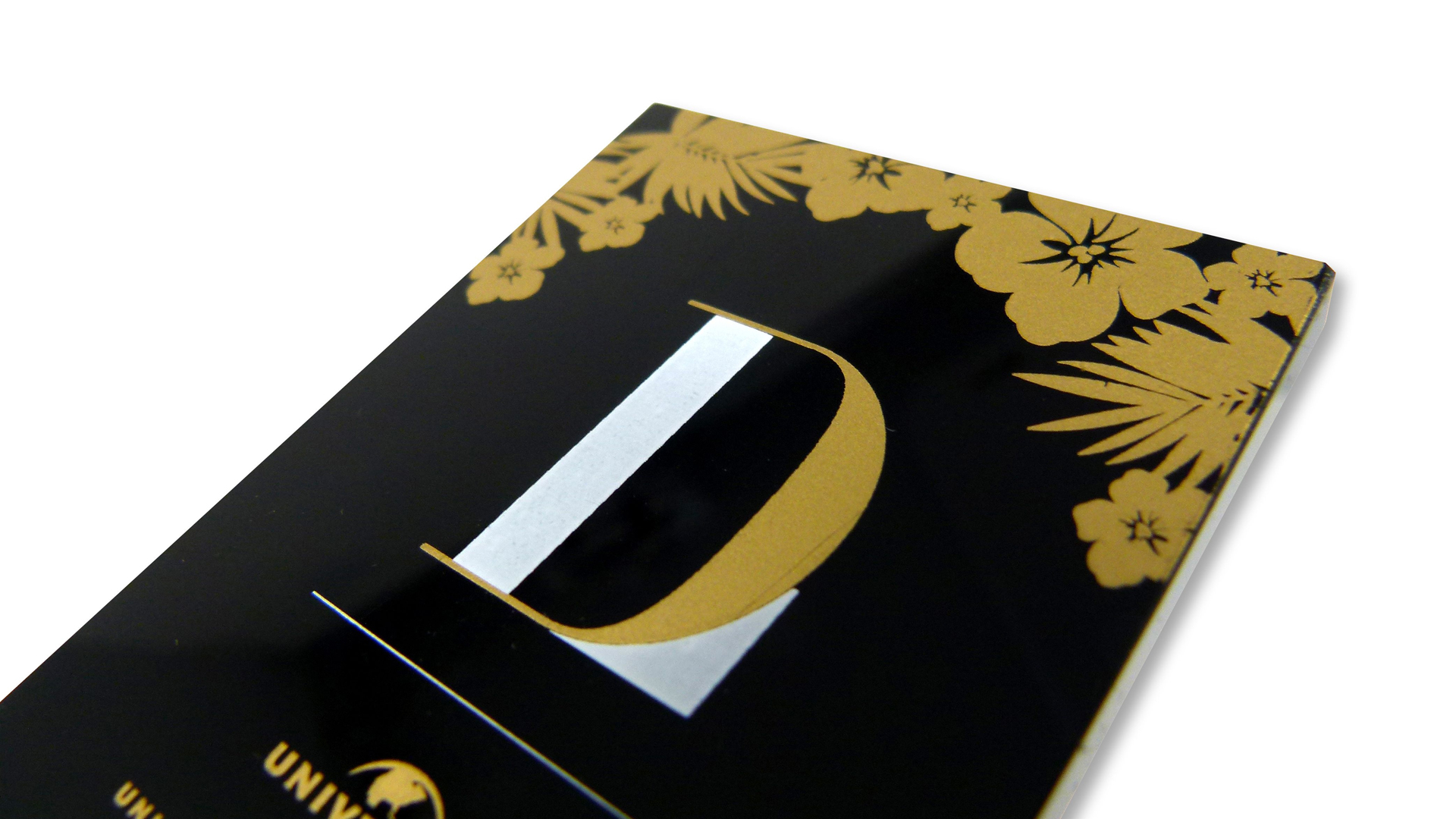 But as these raffle-tickets were being sold for £100 a piece, Jo couldn’t simply leave it at that. Fortunately, the limited production run of just 100 pieces gave her the opportunity to develop something with a high degree of hand finishing.

Snapping up 100 metal “pop-up wallets” on eBay, she customized each with an eye-catching design inspired by Pavarotti’s customary tux and tails. This was screen printed onto 350 gm (130 lb.) GF Smith Colorplan Ebony. For that extra flourish a Pearlized Black was added for the lapel, and to grab attention at these special evening events, glow in the dark ink was used to screen print the waistcoat. This was then wrapped around the ticket holder, each of which was filled with a single raffle ticket, which popped up with the press of a button. As it happened, the whole suite was also the perfect size to be stowed away in a dinner suit top pocket or clutch. 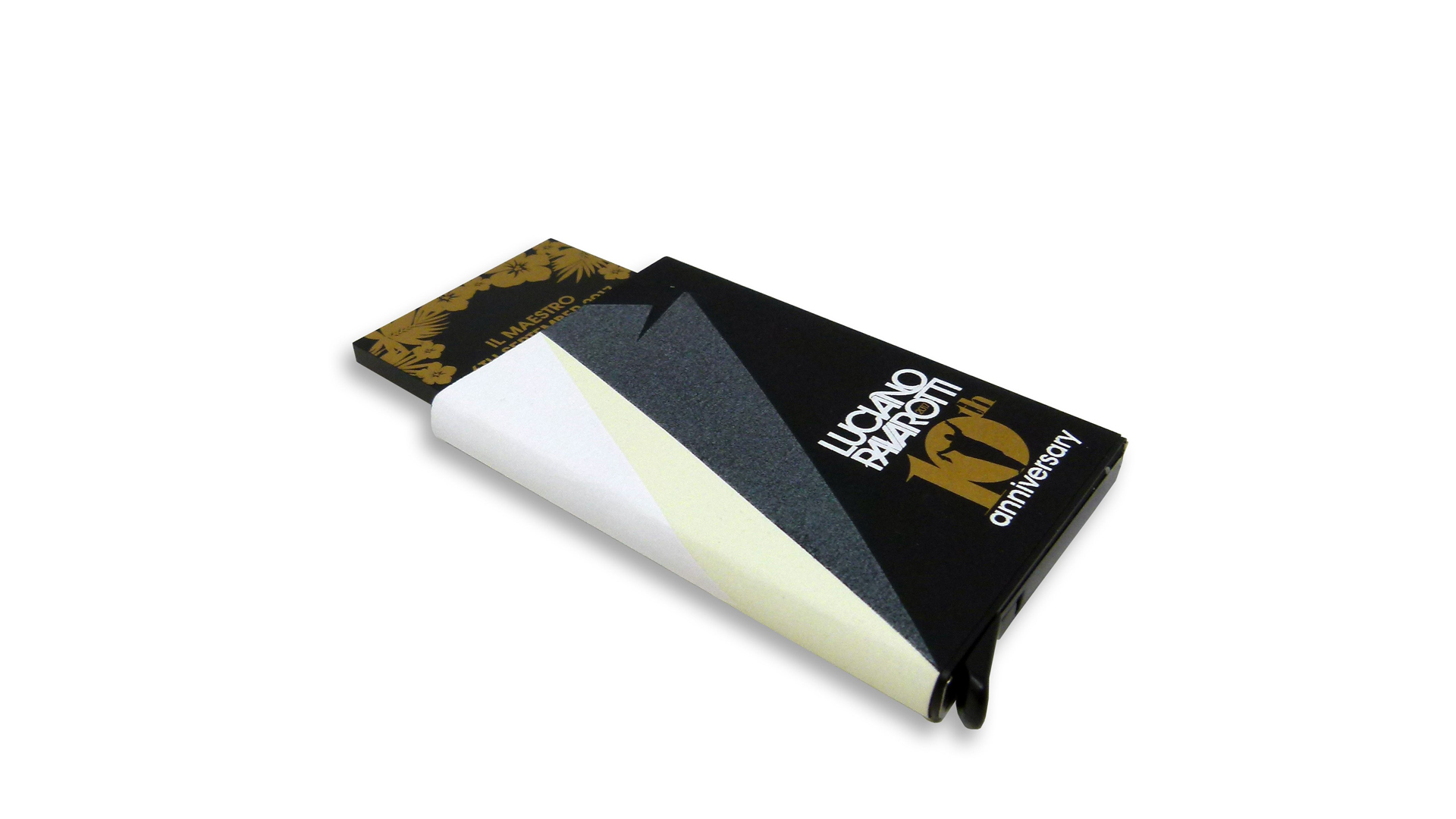 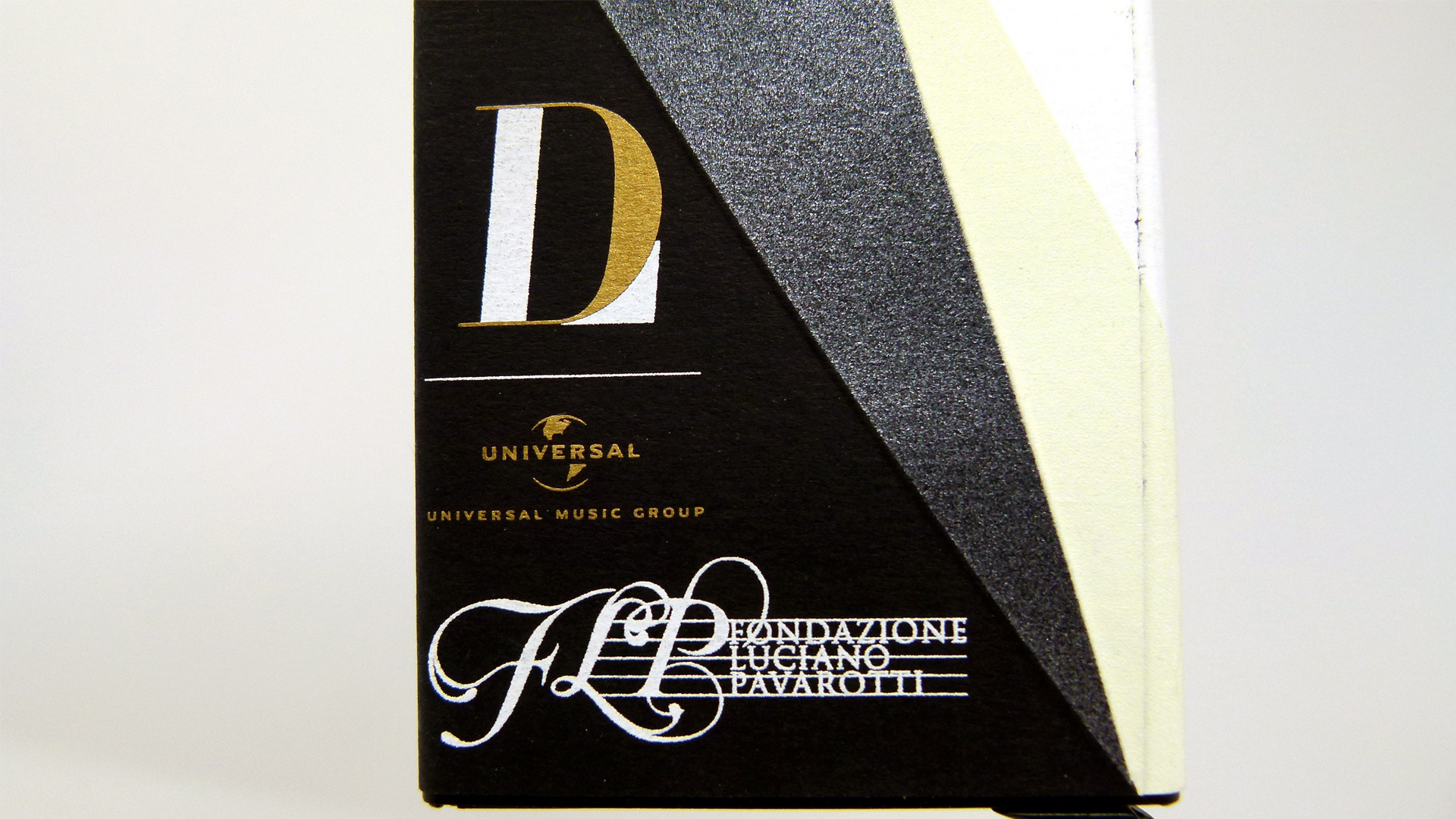 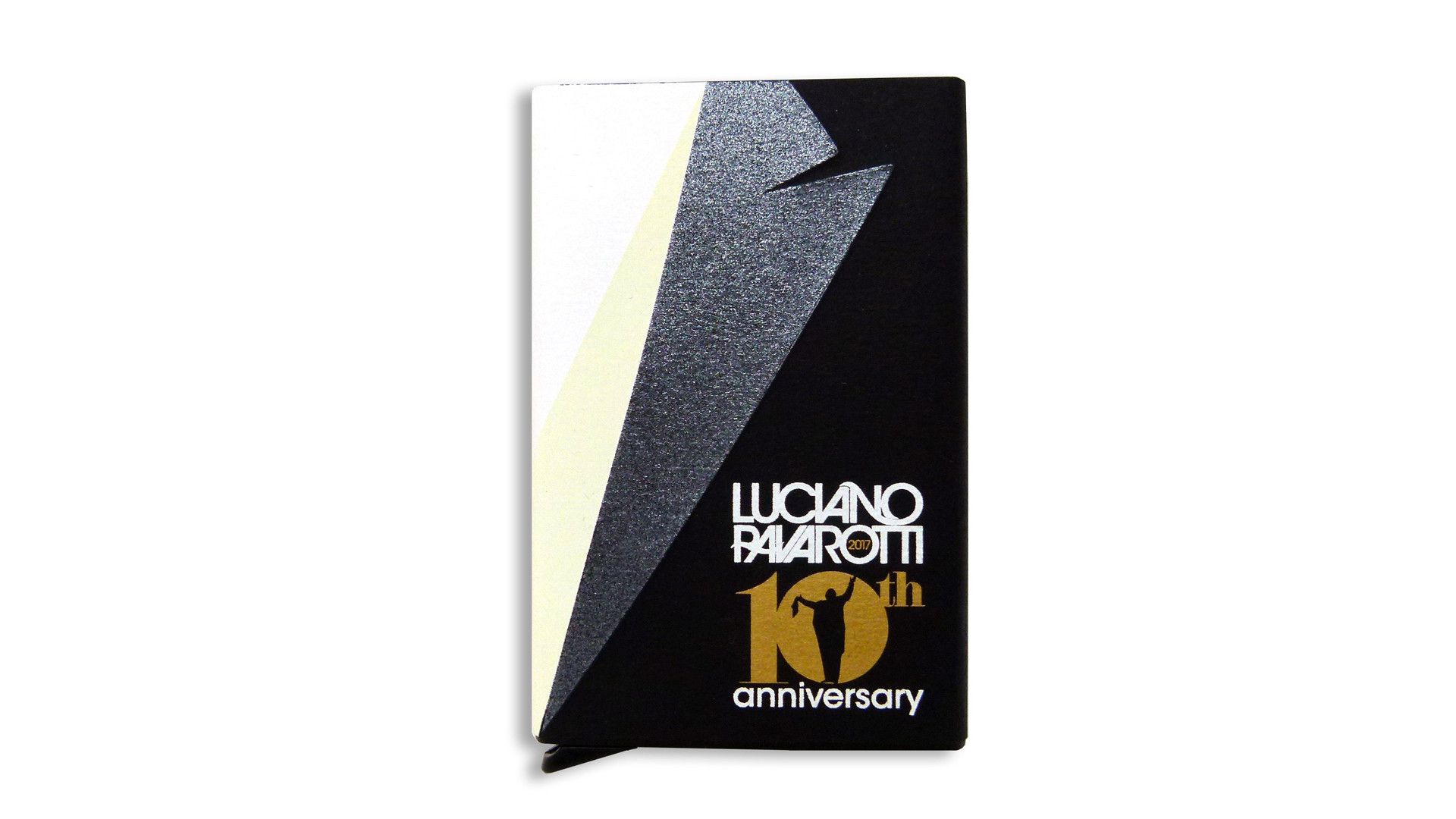 “Ordinarily, to create physical products like this would take much longer than a few weeks, requiring detailed drawings, machinery and prototyping stages,” Jo explains. “I learned that there’s a whole world out there of everyday products just waiting to be repurposed into something unusual and beautiful! And when time is short (as it often is in the marketing world), the world around us is a fantastic place to draw inspiration from.” 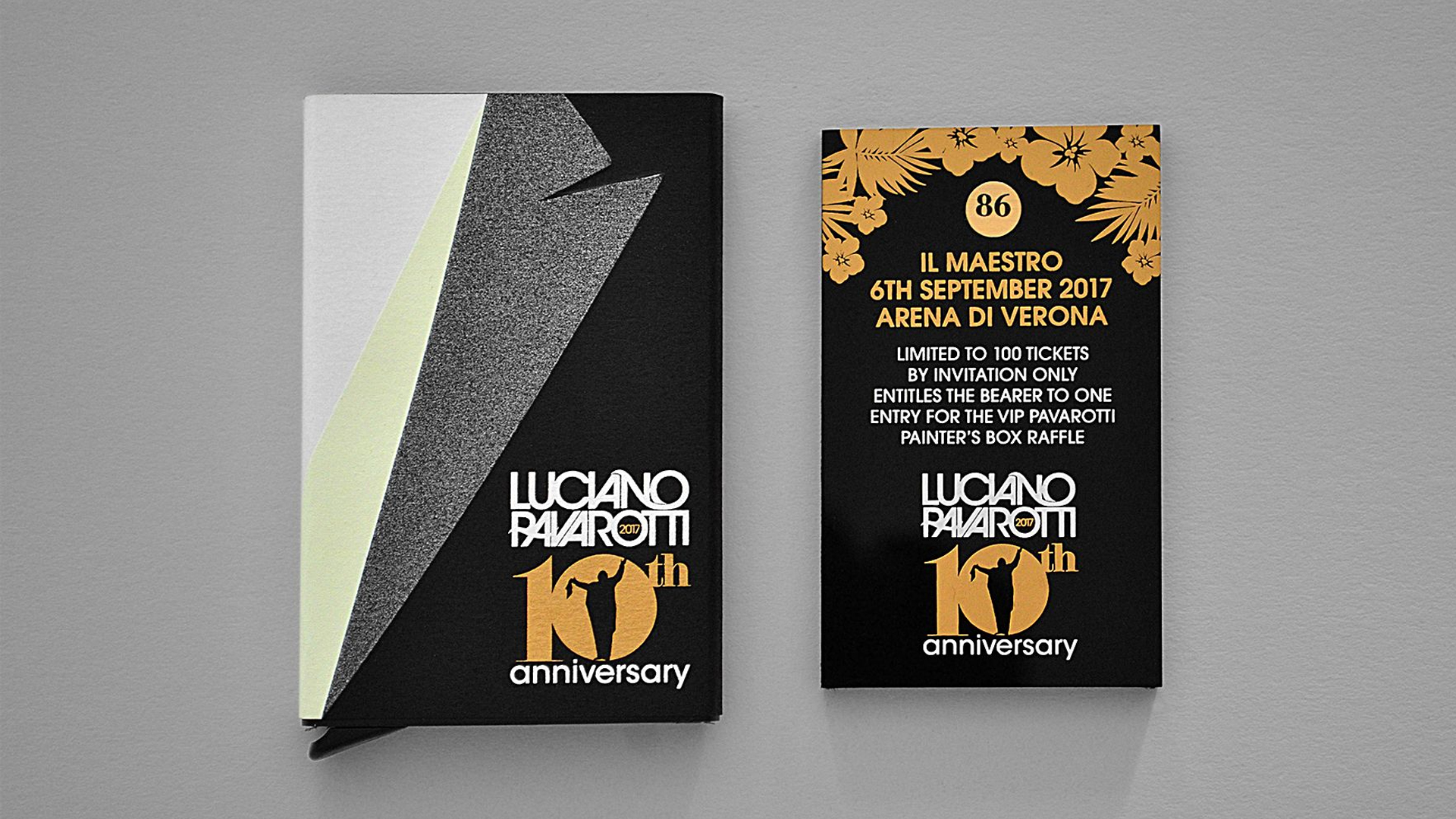