‘A Box is Not a Home’ Client Gift

As the autumn winds blow, we can’t help but be reminded of the holidays fast approaching, and of how cold those winds will be this winter for those with nowhere to call home. MW Luxury – now GPA Luxury – whose elegant boxes for everything from Bacardi to cosmetics we’ve featured here on occasion, reminded their clients of this fact with their client gift “A Box is Not a Home.” 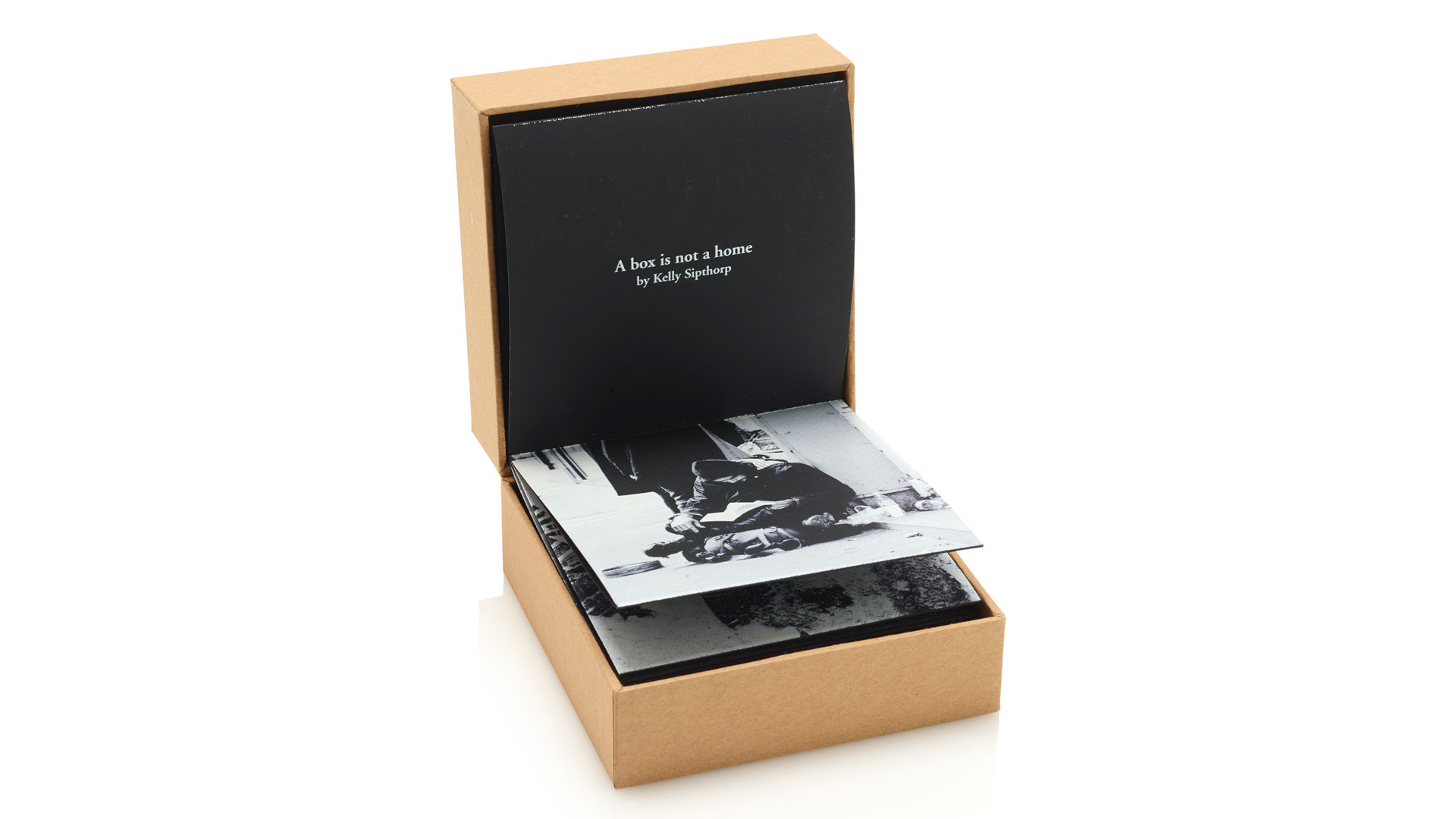 The outer box is a humble affair – gray board wrapped in kraft paper – clearly meant to bring to mind images of the boxes in which our most vulnerable citizens seek shelter. “A box is not a home…” is the only printing on the lid, which is held shut by a magnetic closure. Lifting it reveals a world of beauty completely at odds with the plain look of the box itself. 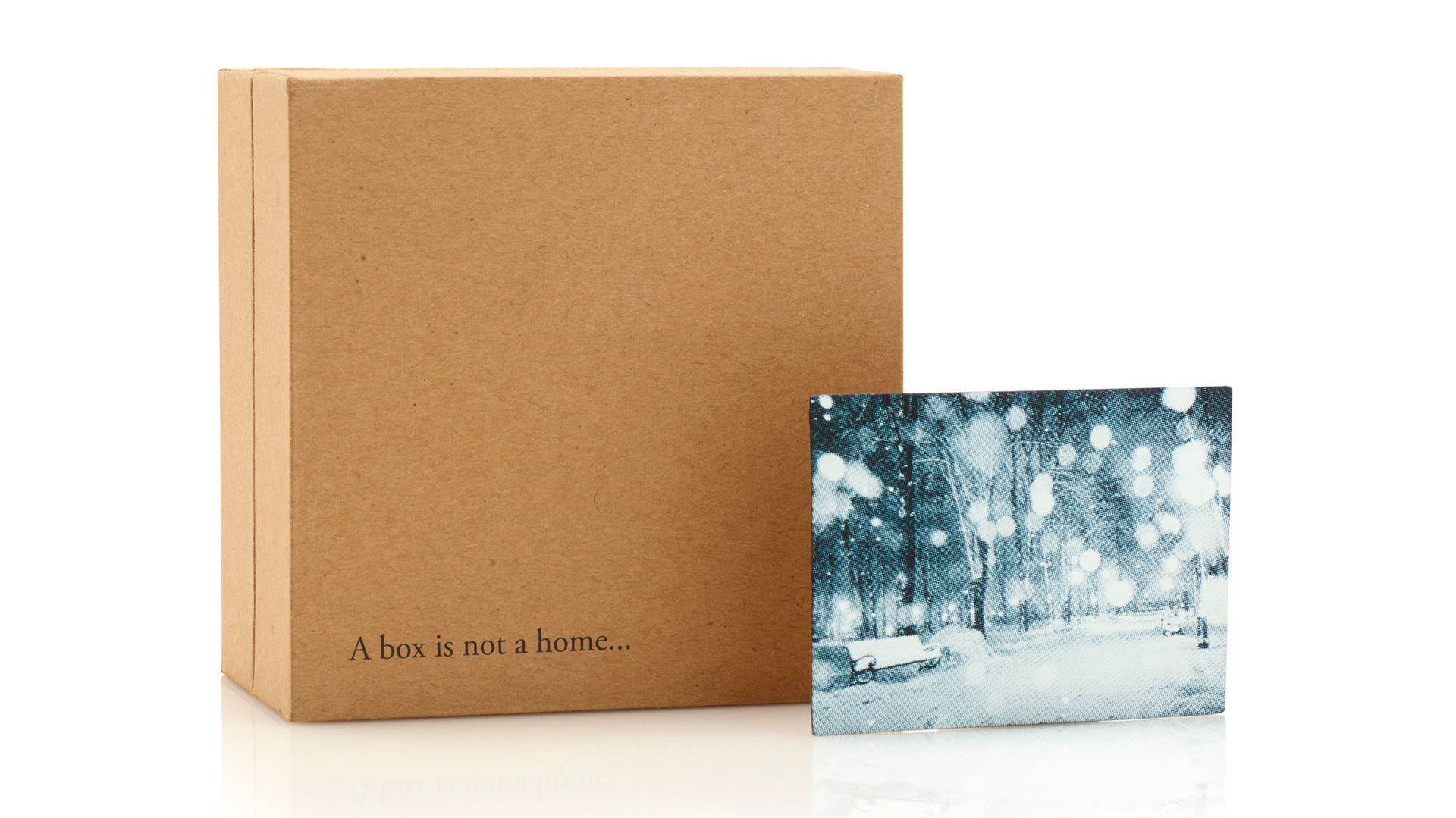 Inside, printed on 200 lb. (300 gsm) black card stock and gathered in a fan that unfolds as you open the box, are several photographs screen printed by Lorenz Boegli, each depicting a candid image of those with no place to go. A man pores over a book on the street; the soles of someone’s shoes recline on a bench – each image is as beautiful as it is heart-wrenching. What makes these images particularly haunting is the unique way in which they were printed.

As the packaging company described the Swiss printer’s process: “First, he combined Iriodin pigments and varnish to form a color paste, which he spread over the print plate for the first layer. The second stage involved a white ink plate, which picked out the brighter spots of each photo. In the last stage, Boegli added a silver pearl pigment, which lent a shiny coating to the print and achieved a unique luxury finish.”

The combination of cool blue and white inks, together with Lorenz’s own custom-made mesh screens, adds a cold-yet-vibrant cast to the images. A short poem, “A Box is Not a Home,” penned by MW Senior Account Manager Kelly Sipthorp, accompanies the photographs. 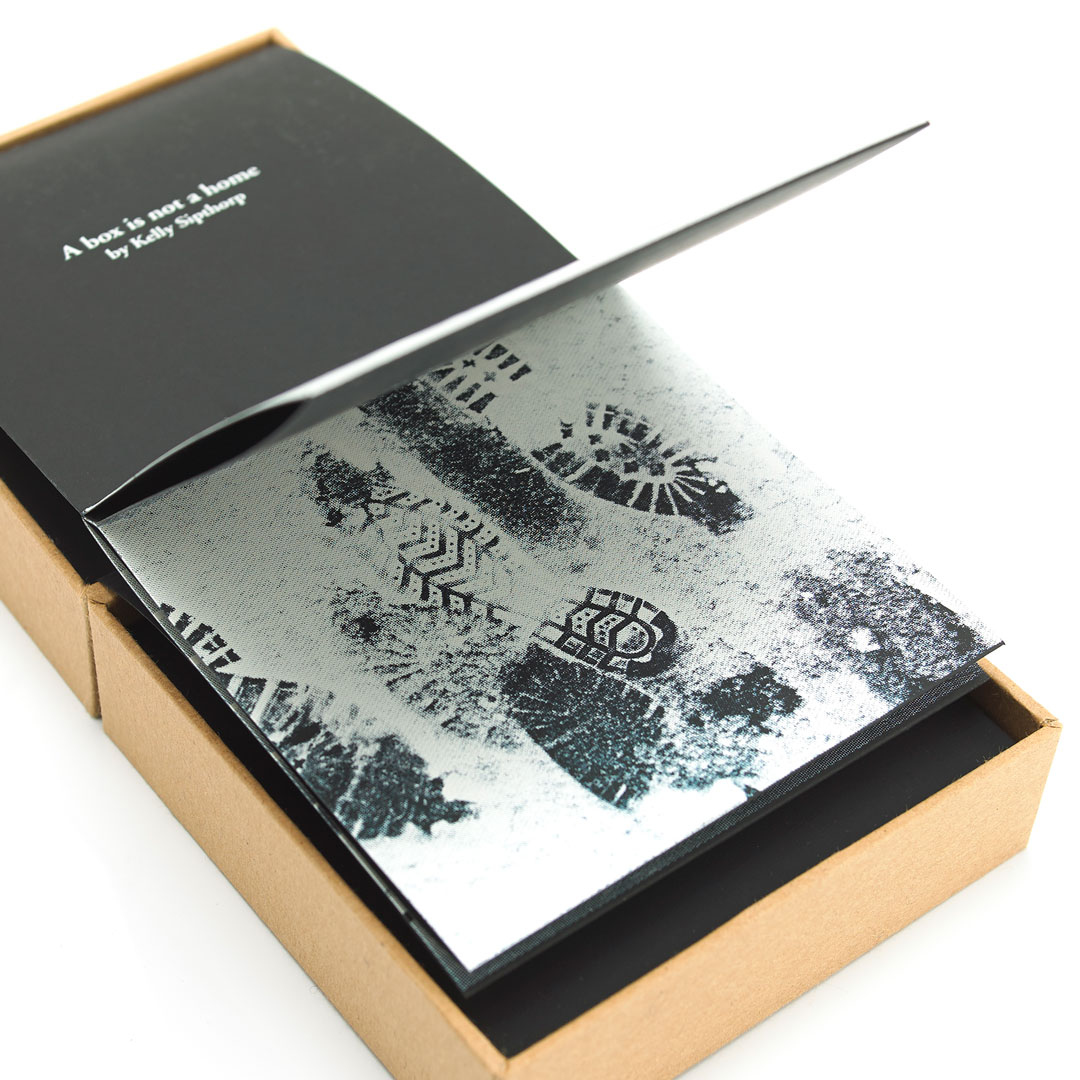 The final panel of the fan informs the recipient that a homeless person will be receiving a Christmas gift in their name. A small card, inserted into 2 die-cut notches, depicts a magical, snowy scene on 1 side, and reveals the number of the box (out of the 400 made) on the other, as well as the name of the charity involved in this endeavor: Jimmy’s Cambridge in England. (One homeless person received a hot meal from Jimmy’s as well as a financial donation for each box as part of this campaign.)

So often client gifts are upbeat, joyful items, designed to demonstrate how magnificent a company’s work can be. MW Luxury’s creation, on the other hand, reveals that while they are perfectly capable of thinking outside the box, they’d prefer during the holidays that people concentrate instead on those who must live inside one all year long. 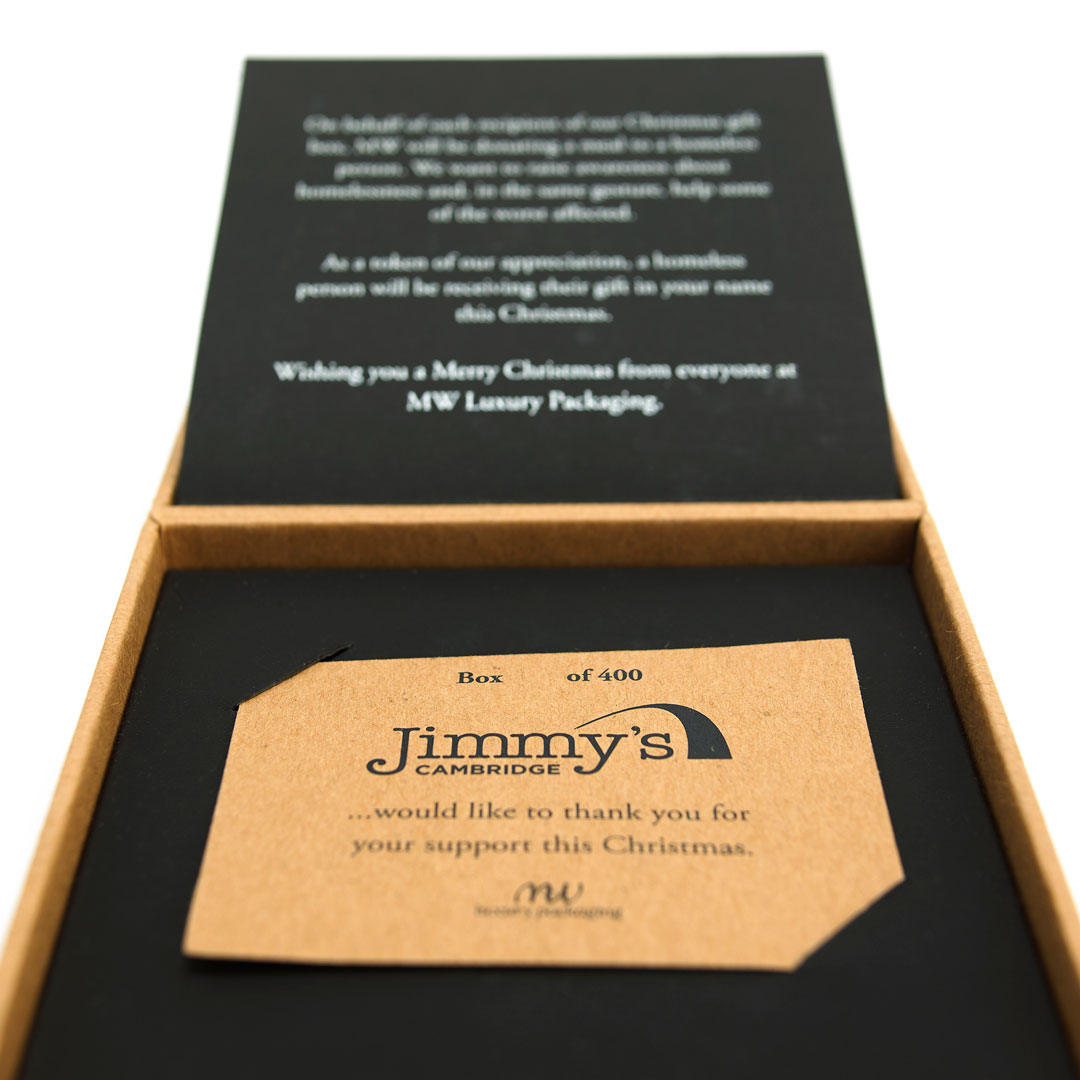 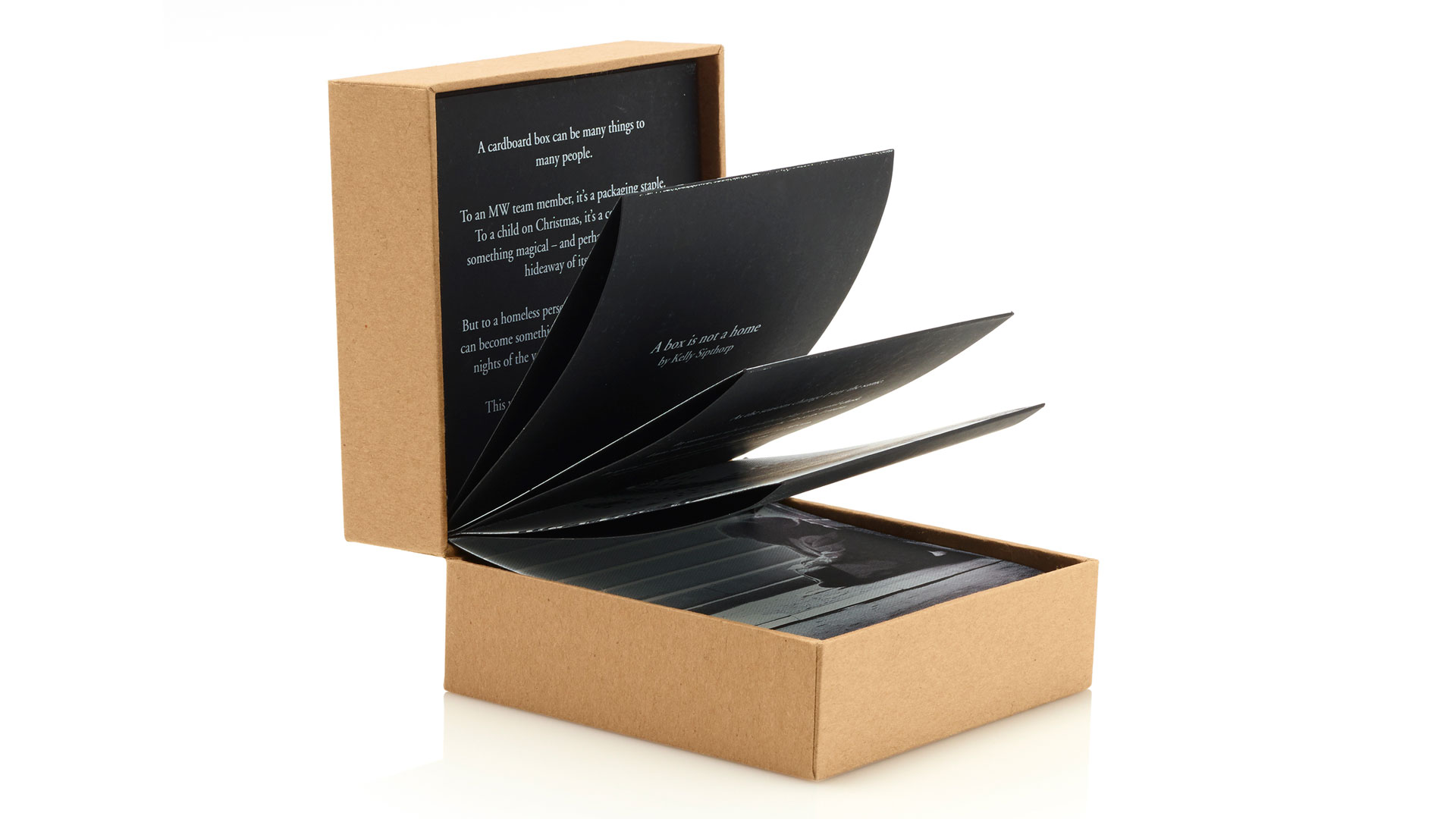