In Charlottesville, Va., as in many college towns, the present overlaps the past in everything from monuments to architecture. Starting in 2017, that coexistence of yesterday and today took on additional significance for the city’s University of Virginia, which kicked off a two-year celebration in the run-up to its bicentennial in 2019. Founded by former president, and Declaration of Independence signer Thomas Jefferson, the institution was eager to remind celebrants of its storied history, starting with the laying of its cornerstone in 1817. The commemorative program that Watermark Design crafted for the event skillfully uses different types and sizes of paper layered together, effectively capturing the rich-yet-haphazard nature of history itself. 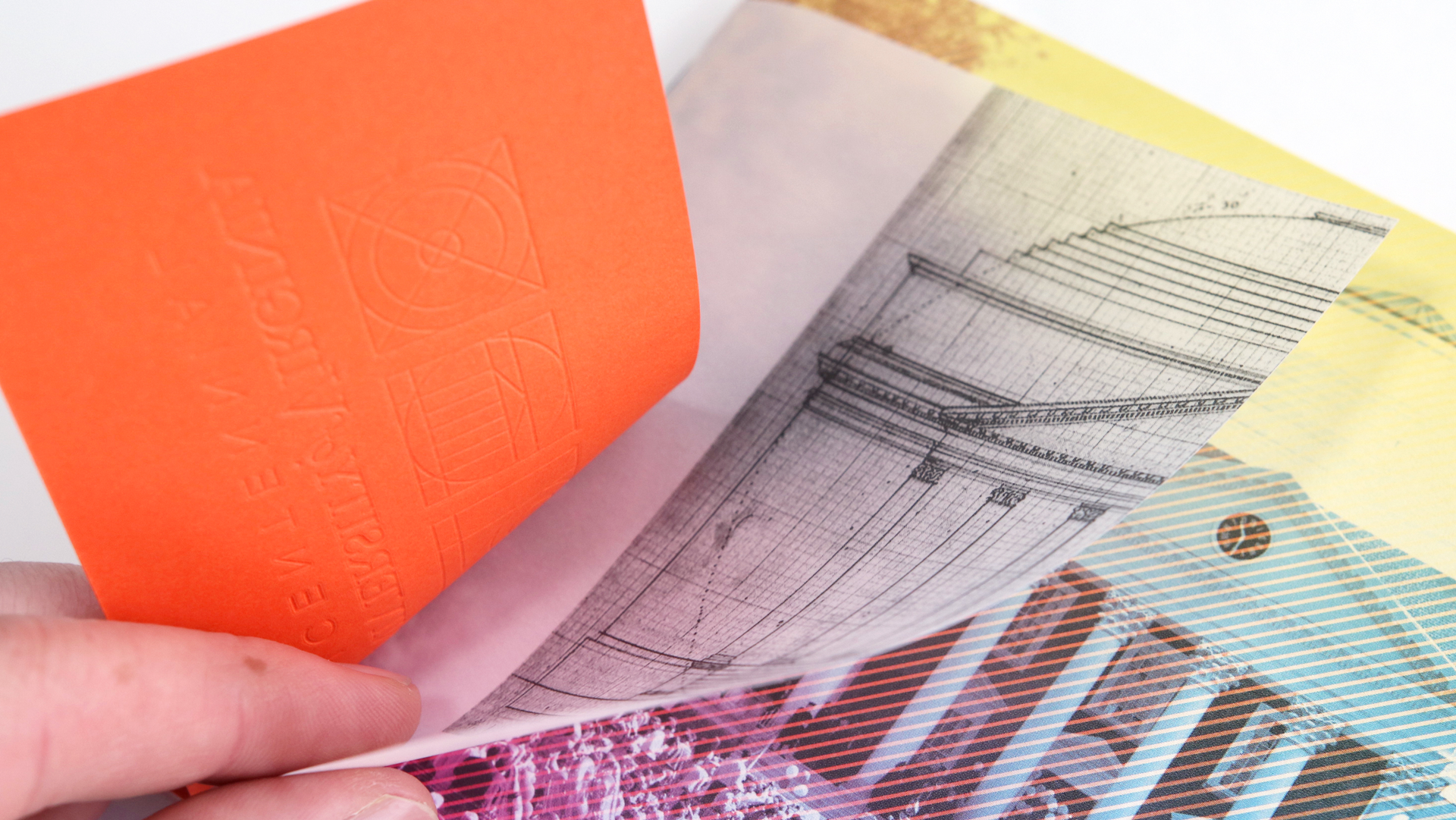 Directed by the university to make the piece “feel like a party,” Watermark blended beautiful black and white photography with colorful design accents and bold typography inside the booklet, which highlighted some of the programs scheduled to be part of the UVA bicentennial celebration – a strong visual suggestion of the past and present colliding.

The interior pages were printed on 80 lb. Rolland Opaque Smooth Text [Get Swatchbook!]. The real crowning glory of this piece, however, are the program’s multiple covers. It is in these that the past and present truly come together as one. 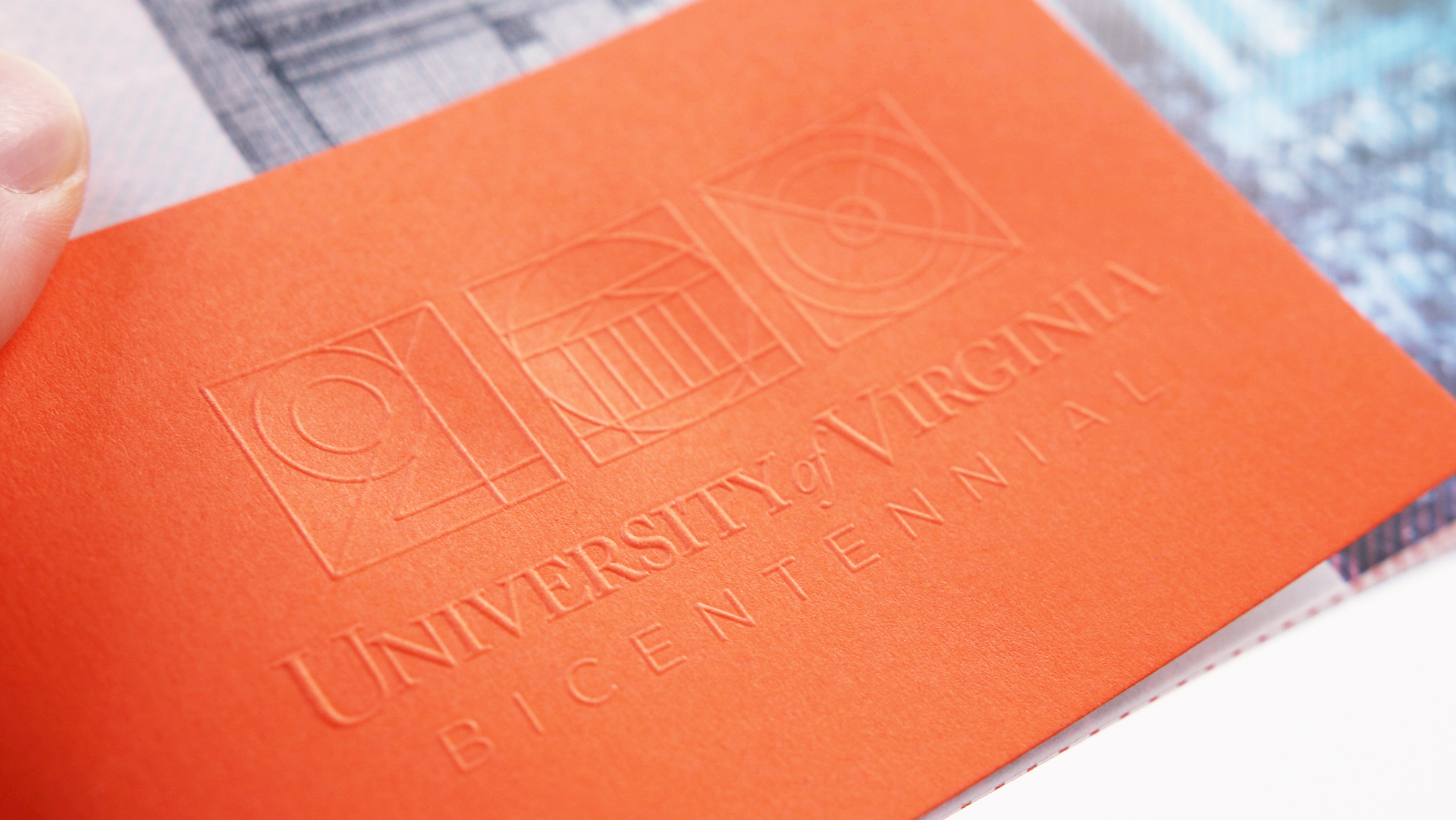 Working from the outside inward, we have a very short short-cover made of 80 lb. Orange Neenah Astrobrights Orbit Cover, alive with tactile appeal thanks to a crisp blind emboss featuring the official Bicentennial mark – itself inspired by Jefferson’s own original sketches for the school’s rotunda.

The founding father’s handiwork appears again on the second layer – a half-cover boasting a detailed sketch of that same rotunda on translucent 48 lb. Glama Natural Clear from CTI Paper [Get Swatchbook!]. The product of pure design inspiration, Jefferson’s rendering on this sheet lines up perfectly with a photo of the real-life rotunda on the full cover just beneath this one, the photo’s details clearly emerging through the translucent Glama sheet – past and present, indivisible! (That photo sheet is 100 lb. Rolland Opaque Smooth Cover.)

In the end, this program for the University of Virginia’s bicentennial, like its founder’s own vision for the country he helped to usher into being, is greater than the sum of its parts. 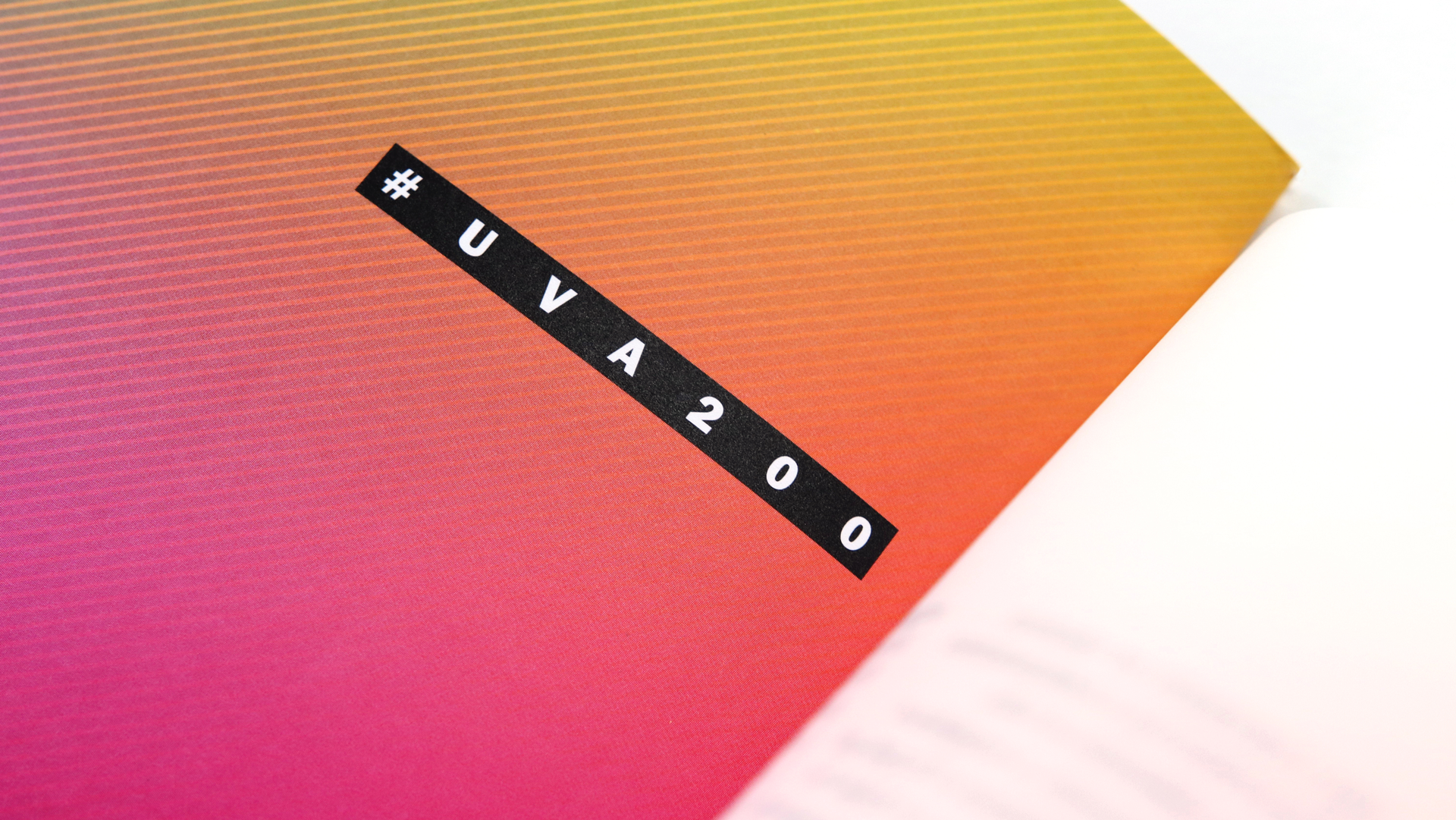