Where the Print Blanket Meets the iPad

Occasionally – very occasionally – a company has a flash of inspiration so brilliant that everyone who encounters it looks around in awed silence. This is the reaction that the environmentally-obsessed MET Fine Printers gets when potential clients and curious parties alike discover that the company recycles its bound-for-the-scrap-heap printing blankets…into belts, wallets and iPad sleeves.

While every other company struggles to come up with branding materials that somehow communicate what they’re about, MET has neatly distilled its environmentally-friendly ethos into a few highly desirable products designed to appeal to print geeks everywhere. 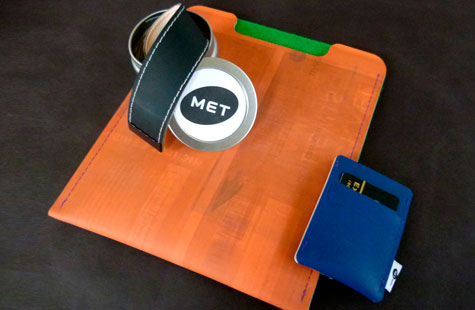 Eco-friendly as Brand Identity
Before we get into those products, it might help to understand a bit about the printing process itself, says Scott Gray, vice president of branding for Vancouver’s MET Fine Printers.

“Typically on a printing press you have a blanket on each printing unit. And after a certain amount of time they wear out or get a bit of physical damage. Or in the case of UV printing, which we do, they will develop a ghosted image because of the low VOC emission inks and ultra-violet lamps that we use – it simply bakes an image onto the blanket. This can show itself on the next printing job, and cannot be removed by traditional mechanical blanket washes available on the market today.” These printing blankets are traditionally used once and tossed into local landfills.

Simply trashing the rubber-and-canvas blankets is not an option – MET has built a solid reputation as a printer uncompromising in its dedication to environmental responsibility. It’s on its fourth year as a carbon-neutral operation, and it’s very nearly become a 100% waste-free one during that same time. For the 3% of material that isn’t recycled, there are six garbage cans located outside – locked up in a cabinet. Employees have to ask permission to throw something away.

Now you’re getting the picture.

About 11 years ago, the company formed a partnership with Enviro Image Solutions to develop ways to recycle those printing blankets once they could no longer be used on press. That soon blossomed into a subscription service that EIS offers to printers all over the world. Once the blankets wear out – usually between 4 and 6 printing cycles – they’re refurbished, and back to the presses they go. 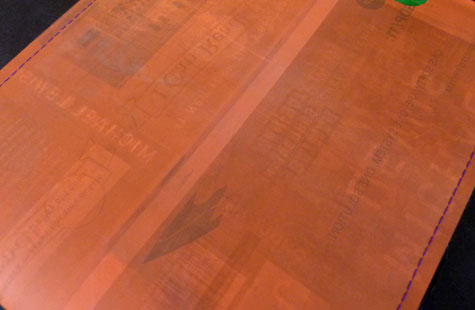 Where the Rubber Meets the iPad
Despite its rigorous blanket renewal program, occasionally there are blankets that are simply too damaged to be repaired. For those, EIS “pioneered the practice of preparing them for use at a local cement company as alternative solid fuel, instead of coal, because it burns so hot and so clean. And any residual ash [generally goes into the manufacture of] Portland cement, making the entire program landfill free,” says Gray.

Even so, there are plenty of blanket scraps left over that intrigued everyone at the printing company. “We’ve got this beautiful industrial material, super thick, super hard, yet durable and flexible – it feels like soft leather,” he explains. “We just thought we’ve gotta be able to do something with it.”

Three years ago, after approaching college industrial-design and graphic-design classes, the company was delighted to see what was proposed.

“Someone came back with ‘let’s make a shoe,’ which turned out to be really uncomfortable and the sole was too slippery. And then ‘let’s make a bag, let’s make a purse’ or clothes,” he remembers. “Then all of the sudden we’ve got this beautiful little wallet.”

But they did not stop at wallets.

MET contracted with Anonum Design in Vancouver to create several different items out of the blankets.

After they hit on the idea of lining large folds of print blanket with felt, an iPad sleeve was born. And because the print blankets come in different colors – 10 shades in all – the items they made from them could be branded to a particular company’s colors. MET Fine Printers now had rare tchotchkes – which they branded MET Hard Goods – that they could now bestow upon their clients.

Yet the detail that put these over the top in the desirability category were the faint images from past printing jobs that could be found on many parts of each blanket – “tattoos” as they came to be called. “It might be a job we did for Nike that’s got a cool image of an athlete running across it,” says Gray. “And it’s cut down into a belt, an iPad sleeve or wallet.” 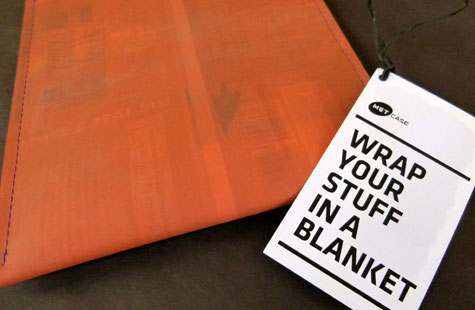 Goods that Walk the Talk
To date MET Fine Printers has made 250 belts, 200 wallets and 200 iPad sleeves, most of which have since been passed along to clients, says Gray.

The printing company even had an agreement with the British Columbia chapter of the Graphic Designers of Canada – the Canadian equivalent of AIGA – to sell the items on their website. “But we ended up running out, so I would’ve had to make another batch,” he says. “Which I might do.” If and when that happens, proceeds will go toward a scholarship for graphic designers.

A lot of hard work goes into the making of MET Hard Goods, Gray points out. “I could make a couple hundred of these in 2-3 weeks, but it’s a lot of cutting and a lot of handwork and we have to wax the material and make sure there’s no live ink on it – a fair amount of preparation for sure.”

While he’s a big fan of the items for their own sake, he sees their greater value as being one more MET program that reinforces their core principle: environmental responsibility.

“I could say I’m the greenest guy on the planet until I’m blue in the face, but all I am is that talking head. But when you demonstrate it…”

PaperSpecs PRO members: Thinking it would be pretty cool to have a wallet, belt or iPad sleeve made from a printing blanket? Yep, you guessed it: Here’s your chance to win one with April’s Golden Ticket giveaway!

Not a PRO member, but would love to enter to win one of these beauties? Just click here to begin your membership, then come back to this page and click the link above. 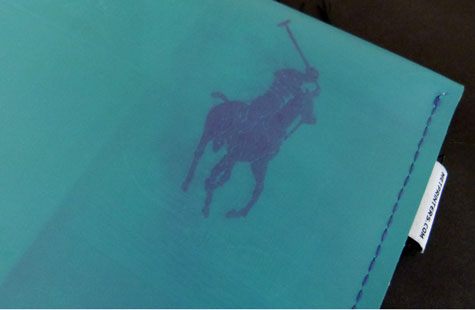 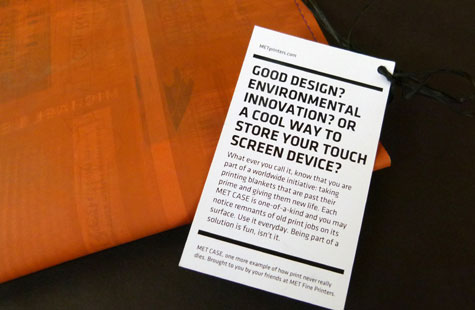