Despite a long list of top assignments, when designer Robert Newman suffered severe head trauma and a brain hemorrhage after a seizure, his friends launched a crowdfunding campaign to help his family tackle the enormous hospital costs involved.

Newman’s no slouch. Among other positions, he was creative director of Real Simple, and design director of Entertainment Weekly and New York magazine.

Newman’s been fortunate in having garnered more than $50,000 in contributions through the site DonationTo so far, and the campaign still has 81 days to go. But of course hospitals can slurp up that amount in a couple of weeks, and his friends are also concerned about the tremendous financial strain this whole ordeal has placed on his family. 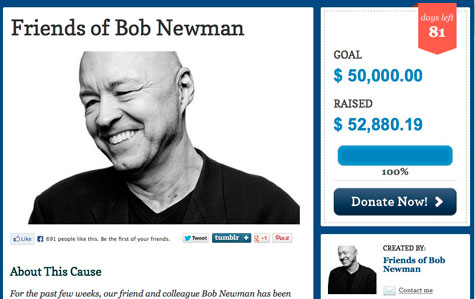 The situation highlights a very dark part of the designer’s world. Like many – let’s go ahead and say most – he worked freelance, meaning he had no salary on which to draw, and whatever insurance he does have isn’t covering everything.

Those wishing to contribute to the Newman family can do so here.