Sex and the Hallmark Card

We must admit to having a soft spot for Hallmark, that plucky greeting card company that has somehow managed to stay in business – and to even, more impressively, keep all those Hallmark Gold Crown stores in business – in an increasingly e-card world. And if they have to hitch their wagon to a second-tier celebrity now and then to do it, who can blame them?

This week, the company unveiled its Sarah Jessica Parker Collection of cards, stationery and gift wrap, which will be sold exclusively at Hallmark Gold Crown stores. 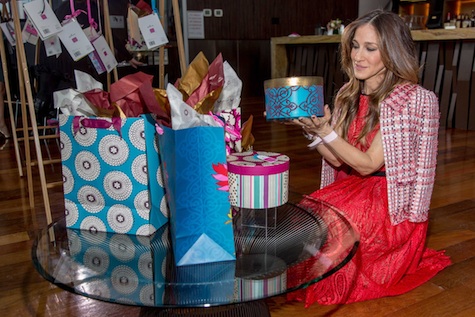 There are more than 70 cards in this collection, covering the usual bases: birthday, love, thank you, friendship, wedding, baby and congratulations. Additional cards will be released for Valentine’s Day, Mother’s Day, graduation and (cue reactionaries) “Holiday 2014”. Prices range from $4 to $7. As the press release explains:

“Parker collaborated with the creative team at Hallmark to develop design themes that reflected her personality, often pairing vintage artwork from the Hallmark archives with more modern touches and embellishments, such as gemstones, ribbon and tulle….The cards feature rich paper stocks with unique combinations of patterns, illustrations, photography and calligraphy.”

Sarah Jessica Parker is an odd choice to tout a Hallmark-store exclusive line of stationery. She is, after all, known mostly for Sex and the City – a television/film series whose subject matter and dialogue would slap the hair rinse right out of the only demographic we’ve ever seen in Hallmark stores every time we’ve poked our head in one.

But no, apparently we have the wrong end of the stick on that one, as Hallmark Gold Crown President Jack Moore explains. “Ms. Parker is not just another celebrity. Like many Hallmark shoppers, she is a very busy wife and mother who cherishes and celebrates the important relationships in her life.”

Not surprisingly, we learn nothing at all about the cards themselves – what paper they’re made from, the artists who – you know – actually created the things. Sarah Jessica Parker has blessed them, that’s enough. The kosher/halal version of 21st century stationery.