Hessian: Identity Without a Product

We’ve been patiently waiting for a new, 21st century riff on traditional corporate identities for quite a while. It seems absolutely everything else has changed in design in the last 100 years but this. And then along comes Hessian.

For $18,000, you can pick up the brand name “Hessian,” including URL, various social media accounts, 20+ logo and other designs, brand book with guidelines, and 30 hours of custom design time to make it all fit whatever you’re selling.

Before you dismiss this as yet another Web gimmick (OK, it is a bit of a Web gimmick), it’s worth exploring the intentions of its creator, designer Ben Pieratt (co-founder of Svpply). As he explains on his site, Hessian is actually a prototype for a new way of approaching the way creative works and business types interact: 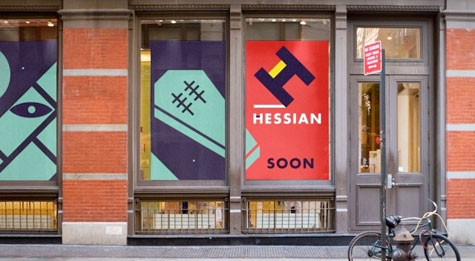 “There are oceans of MBAs, managers and entrepreneurs out there who are passionate and talented at the actual building and leading of companies, but may not actually be great at identifying worthwhile problem/solutions in the market. So it seems to me that in today’s connected environment, there’s no reason designers shouldn’t be able to create designed product packages, and then sell them to entrepreneurs.”

What he envisions is something he’s calling Mined, an online hub where designers, photographers, writers, illustrators and the rest could sell their creative work to those who stand a better chance of making it all pay.

While the concept doesn’t sound that far removed from what happens now, on second glance it completely turns the current setup on its head. Today, there are many sites that force designers et al. to bid for jobs by turning in the lowest rate possible. What’s missing is one viable site where the work itself can be showcased and placed before those who have the business sense to do something with it.

Perhaps the closest thing we have now is something like Behance, which suffers from what we’ve always considered “the poetry problem.” Pretty much everybody writes poetry at some point in their lives, but there aren’t that many people who have the slightest desire to read the stuff. Similarly, sites like Behance only attract other creatives whose pockets are only as deep as their meager per-project budgets allow.

So…is this an idea ready to be Mined?