Seems like every time a movie has another anniversary, we get a new reissue. Add a few half-hearted commentaries, new cover art, and ka-ching! But anniversary reissues of a movie’s theme song? Not quite so common. Then again, if that movie has one of the most ubiquitous hits of the 1980s on it – why not?

Ghosties and Gatekeepers we give you the 30th anniversary Ghostbusters 12″ “Stay Puft Edition Super Deluxe Vinyl.” As you can guess, the packaging is pretty cool.

Taking as its theme the enormous Stay Puft Marshmallow Man that appears in the final act (we are NOT seriously going to have a discussion about spoilers for a 30-year-old movie, are we?), everything is contained in a white puffy gatefold jacket “which simulates the feel and texture of a marshmallow”…and also happens to smell like marshmallow! 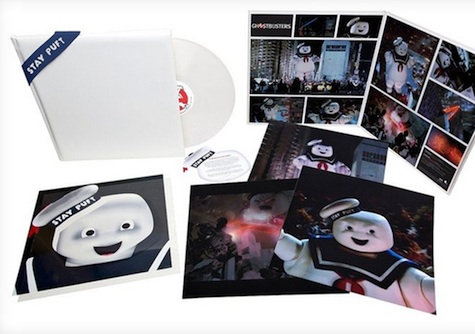 Then there’s the complete set of Stay Puft Marshmallow Man facial expressions with three individual emotions separated onto layers of unbound transparencies. And if you needed further inducement (as if), you get a 6-inch Stay Puft figurine. That’s a lot of marshmallow.