This week an odd triumph is being declared for Adobe’s Creative Cloud platform – one that says far more about what the company has lost than what it has won. According to a survey by CNET.com and analyst firm Jefferies, 58% of those who’ve subscribed to Creative Cloud say they will be renewing their subscription. Nearly 20% said they would not be doing so, and 23% didn’t know.

(Let’s get this out of the way right now – the survey’s sample size was just 187 respondents. Still, these are the first numbers we’ve seen concerning renewal, so these are what we have to work with.) 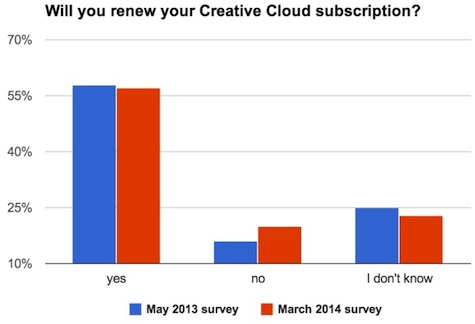 While CNET is characterizing this as something of a victory for Adobe considering the firestorm of resentment that raged over the company’s move to a cloud-only platform last spring, this is actually a pretty appalling showing. (It should be noted that last November’s fiasco over subscribers’ inability to renew their subscriptions might have something to do with this.) 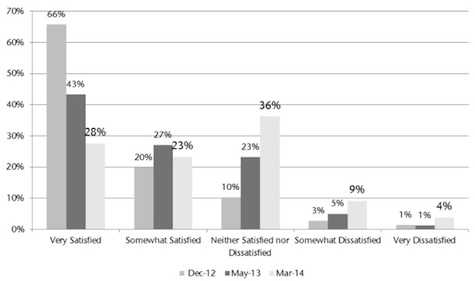 This means that about 42% of designers, photographers and the like who were dragooned into using Creative Cloud are likely to go back to older versions of Creative Suite, Photoshop, or other Adobe applications – or indeed will stop using Adobe software altogether – rather than continue using Creative Cloud.

In other words, a significant number of design and image professionals are willing to risk not being able to work with client files formatted to the latest Creative Cloud standards, or will be using QuarkXPress or some bottom-shelf image or layout software, rather than remaining with the industry standard.

If any other company discovered a mass exodus away from their core products like that, there would be emergency board room meetings and a lot of sleepless nights…